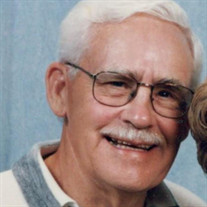 Odbert Earl Raikes, Jr., 90, of Fairmont, passed away on Tuesday, March 3, 2020, at River Oaks in Clarksburg. He was born on August 19, 1929, in Hartville, Ohio, a son of the late Odbert Earl Raikes Sr. and Edith (Prunty) Raikes. Odbert was a United States Army Veteran. He retired from Philips Lighting as a factory worker. Odbert was a member of Trinity Assembly of God Church and was a former member of the Faith Church International. He loved to tend to his yard work, garden and in his younger days enjoyed hunting. Odbert was a volunteer for meals on wheels. Odbert was truly a light in this world. He was a devoted husband, father, grandpa, uncle, and friend. A true pillar at home but also in the community. Odbert was not only an elder in the church he helped build. He was a faithful, compassionate, and strong mentor within. He always had a smile that could light up any room and a gentle way of lending an ear to listen or a hand to help. When you remember Odbert, remember the full life that he lived; a life of never-ending love for his family and for Jesus. Odbert is survived by his step-son, Jeff Kuhn and his wife Rhonda, and their children, Ethan and Dylan; his step-daughter, Sherry Swint and her husband Howard, and their children, Ariana and Madeleine; his grandchildren: Matthew Hines and his wife Tracy, Daniel Neel, Shawna Raikes, and Johnna Santos and husband Robert; his great grandchildren: Aaron Hines, Brandon Hines, Chenoa Nester, Leigh Ann Nester, Mary Jo Nester, Joey Santos, Jacob Santos, Elysia Santos, Jonas Neel and Max Neel; as well as several nieces, nephews, and cousins. In addition to his parents he was preceded in death by his first wife, Mary Alice (Shreves) Raikes; his second wife, Connie (Moore) Kuhn Raikes; his daughters, Jo Linda Greene and Janice Neel; his son, John Raikes; his grandchildren, Melissa Hines and Mark Neel; and his brother, Francis Raikes. Family and friends are welcome to call at Carpenter and Ford Funeral Home, 209 Merchant St., Fairmont, on Sunday from 1:00 – 4:00 p.m., and on Monday, March 9, 2020, from 10:00 a.m. until the service at 11:30 a.m., at the funeral home, with Pastor Skip Vincent officiating. Interment will follow at West Virginia National Cemetery, where military rites will be conducted by the Marion County Veterans Honor Guard and U.S. Army reserve from Camp Dawson.

Odbert Earl Raikes, Jr., 90, of Fairmont, passed away on Tuesday, March 3, 2020, at River Oaks in Clarksburg. He was born on August 19, 1929, in Hartville, Ohio, a son of the late Odbert Earl Raikes Sr. and Edith (Prunty) Raikes. Odbert was... View Obituary & Service Information

The family of Odbert Earl Raikes created this Life Tributes page to make it easy to share your memories.