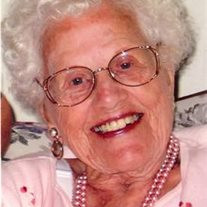 Nettie B. Layman, 106, of Fairmont passed away on Tuesday, June 8, 2010 at Pierpont Center at Fairmont. Ms. Layman was born in Marion County, November 26, 1903 on Thanksgiving Day, the daughter of the late Harry F. Layman and Della Shrenia (Morgan) Layman, granddaughter of the late William Colvin Morgan, a Civil War Veteran and a direct descendant of Col. Morgan Morgan, the first permanent settler in West Virginia. Nettie attended Central and East Park Schools and took several classes at Fairmont State College where she earned her GED diploma. She started working at the C & P Telephone Company of West Virginia at the age of 17 and retired as a Long Distance Chief Operator, having worked 39 years. Nettie had taken numerous courses given by the Telephone Company and was chosen as group leader for the “Design for Living” program. At Career Night held for high school students at Fairmont State College in 1957, she served as a consultant representing C & P Telephone Co. Ms. Layman was the oldest living Telephone Pioneer in the State of West Virginia. She was always very active in the Telephone Pioneers of American and had served as Publicity Chairman for 35 years. Working with the Telephone Pioneers she assisted in planting 85 trees at Pricketts Fort, helped paint United States maps on several school playgrounds in Marion County and assisted with wiring for internet in county schools. She was chosen as “Pioneer-of-the-Year” in 1996-97. Ms. Layman was a faithful, lifetime member of the former Evangelical United Brethren Church, later, Christ United Methodist Church and presently Gateway United Methodist Church in Fairmont. She held many offices over the years, including Trustee, finance committee, Church Historian, Chairman of the Kitchen Committee and Wedding Receptions. She was site supervisor of food distribution from North Central West Virginia Community Action Program. She also sang in the church choir for several years. Nettie, along with the late Myrtle Gates, managed the Rummage Room Sales every Friday for 28 years, which benefitted the Church some $40, 000.00 over the years. Nettie was inducted into the West Virginia Voter Hall of Fame in March of 2008, at the age of 104, by the then Secretary of State, Betty Ireland and Marion County Clerk, Janice Cosco. The criteria for being inducted is that the voter must have participated in the general election for at least the past 50 years. She not only did not miss voting, she also volunteered to work at the polls. She also volunteered at the American Red Cross Blood Donor Days and was a member of the Civic League department of the Woman’s Club of Fairmont and was their pianist for several years. In 1968 she received a plaque as “Honorary President of the Marion County Cancer Society”. On her 100th birthday she was given a party at the Church social room with many friends and relatives attending. At that time she was given many honors, among them the Order of the 35th Star Medallion and was recognized by the Marion County Commission with a Proclamation honoring her. November 26th 2003 was designated as “Nettie Layman Day”. In 2005, Ms. Layman was presented with the “ Certificate of Recognition” from Gov. Joe Manchin III as a Distinguished Mountaineer. Ms. Layman is survived by her nieces and nephews, Melba and Joseph Lough, Robert Ellis, and John and Lois Layman all of Fairmont and Martha and Howard West of Chestertown, Maryland; great nieces and nephews, Debbie and Kenny Barker, Patty and Jimmy Myers, Jeannie and Jay Rogers, Sharon and Ernie Dennison, Diane Kent, David West, Larry and Linda Zinn, Dale and Donna Zinn, Rosanna Layman, Michael and Michelle Layman and Carolyn and Troy Jordan and several great great nieces and nephews. In addition to her parents, Nettie was preceded in death by a brother, Walter H. Layman; two sisters, Josie Zinn and Lemma Ellis; a niece, Joan Lorraine Kirby and two nephews, Marvin E. Zinn and Walter Layman, Jr.; and a great nephew and niece, Mark and Ruth West. Friends and family may call at the Carpenter & Ford Funeral Home, 209 Merchant Street, Fairmont on Friday from 2pm to 8pm and Saturday 10am to 11am. Funeral services will be at 11am on Saturday, June 12, 2010 at the funeral home with Rev. Donald Thomas officiating. Interment services will follow at Mt. Zion Cemetery. Serving as Pallbearers will be: Larry Zinn, Dale Zinn, Jay Rogers, Jimmy Myers, Kenny Barker, Michael Layman. Online condolences may be sent to her family at www.carpenterandford.com. Memorial contributions may be made to the Telephone Museum, c/o Robert Rexroad, 217 Maplewood Drive, Fairmont, WV 26554.

Nettie B. Layman, 106, of Fairmont passed away on Tuesday, June 8, 2010 at Pierpont Center at Fairmont. Ms. Layman was born in Marion County, November 26, 1903 on Thanksgiving Day, the daughter of the late Harry F. Layman and Della Shrenia... View Obituary & Service Information

The family of Nettie B. Layman created this Life Tributes page to make it easy to share your memories.