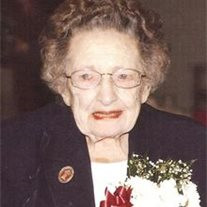 Dr. Naomi (Boyers) Hovatter Naomi “Nicki” (Boyers) Hovatter, 103, entered into eternal life on Friday March 4, 2011 at her home. Naomi was born in Fairmont on October 23, 1907, a daughter of the late Dr.William F. and Lovanna (Riggs) Boyers. She was a lifelong resident of Fairmont and was the devoted wife of the late Harry Hovatter. Naomi was a woman who took on many challenges in her life. She graduated from East Fairmont High School and then went on to graduate from Fairmont Normal School/Fairmont State University with a degree in education. Teaching for several years, she went on to further her education in Chicago, graduating as a Podiatrist. She practiced as a respected Podiatrist in the Fairmont area for several decades. She was active in numerous community programs throughout her life. Naomi served as a Worthy Matron of the Eastern Star Chapter #34 of Fairmont. During her time as Worthy Matron she helped organize the Rainbow Chapter in Fairmont. She was a member of Gateway United Methodist Church. Naomi was very independent in her thinking and actions. She had a keen memory of the people she met and the history of Fairmont. As an honoree by the University, she surprised the community at the age of 101 giving an articulate and accurate speech at Fairmont State University. Her last contribution to the community was her knowledge and insight of Fairmont to the "Finding Fairmont" podcast documentary by Main Street Fairmont. She was a woman of small stature but strong personal beliefs, faith, wisdom and sense of humor. Nicki’s life motto had always been “do not resent growing old...many are denied the privilege.” Although not having children of her own she had a loving and extended family. She is survived by her nieces and their spouses, Ruth Ann (Smouse) Swan and her husband Frank of North Augusta, SC, Linda (Layman) Hall and Byford of Gainsville, FL, and her nephew and his wife, Dr. William R. Smouse and Ann of Ft. Lauderdale, FL. There are four generations of loving family and numerous friends throughout the world who will miss her wisdom, wit, insight, and history. In addition to her parents and the rest of her family, Naomi was also preceded in death by a brother, William Frank Boyers, and three sisters, Ruth Smouse, Louise Layman, and Pauline Boyers. Family and friends may call at the Carpenter and Ford Funeral Home, 209 Merchant Street, Fairmont on Wednesday from 6-8 pm there will be a Eastern Star Memorial Hollow Square Service at 7pm at the funeral home. Visitation will continue Thursday from 10-11 am. The funeral service will be held at the funeral home on Thursday March 10, 2011 at 11:00 am with Pastor Steve Meadows officiating. Interment will follow at the Mt. Zion Cemetery at Marquess in Preston County. Memorial contributions may be made to the Order of the Eastern Star Chapter #34 Fairmont, PO Box 6, Fairmont, WV 26554 or to the Gateway United Methodist Church, 301 Diamond St., Fairmont, WV 26554. Online condolences and memories may be left at www.carpenterandford.com

The family of Dr. Naomi Hovatter created this Life Tributes page to make it easy to share your memories.