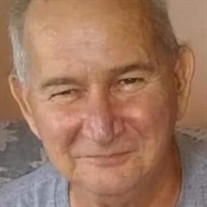 Michael Eugene Stewart, 66, of Montana Mines, passed away at his home on Wednesday, August 12, 2020. He was born on August 13, 1953, in Fairmont, a son of the late Thomas and Nancy “Jo” (Williams) Stewart. Michael worked as a machinist at Lynch Hydraulic for ten years. He enjoyed fishing, camping, and working on cars. He was Methodist by faith. He is survived by sons, Josh Stewart and girlfriend Abbey French, of Fairmont and Michael Stewart II, of Montana Mines; daughter, Christina Michael and husband Chris, of Burton; brothers, Thomas Stewart and wife Cheryl, of Barrackville, and John Stewart and wife Sue, of Montana Mines; and grandchildren: Mikayla Stewart, Ashleigh Stewart, Tytus Stewart, Ezekiel Stewart, Isaiah Michael, Jasper Michael, and Hunter Michael. In addition to his parents, he was preceded in death by son, James Stewart, and brother, Cecil Stewart. In keeping with his wishes, Michael will be cremated without any services.

The family of Michael Eugene Stewart created this Life Tributes page to make it easy to share your memories.

Michael Eugene Stewart, 66, of Montana Mines, passed away at...