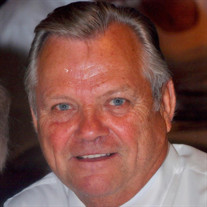 Michael Sivnksty Jr., 79, of Fairmont, passed away at Fairmont Regional Medical Center on Wednesday, July 24, 2019 after losing a long battle to cancer. He was born on June 23, 1940, in Arford, a son of the late Michael “Mike” Sivnksty Sr. and Alberta (Trusko) Sivnksty. After graduating high school, Michael went on to proudly serve his country in the United States Air Force, working as an airplane mechanic. He retired from the assembly line at General Motors. Michael was an amazing husband, father, son, and grandfather. He was a strong, caring, loving man who would do anything for his family. He is survived by his loving wife of 56 years, Pamalla (Jefferys) Sivnksty. He is also survived by sons: Michael Allen Sivnksty and wife Denise, and Darren Wayne Sivnksty and wife Kim, all of Ohio; daughter, Michelle Lee Robinson and husband Bill, of Arford; brother, Evangelist Jerry Sivnksty and wife, Sharon; grandchildren: David Sivnksty, Chelsea Gressier and husband Michael, Corey Anderson, and Lillian Anderson; and great-grandchildren: Sienna, Sabrina, Savanna, and Carsen. In addition to his parents, he was preceded in death by brother, Dennis A. Sivnksty. Family and friends are welcome to call at Carpenter and Ford Funeral Home, 209 Merchant St., Fairmont, on Saturday, July 27, 2019 from 2 p.m. – 4 p.m., with services starting at the funeral home at 4:00 p.m., with Pastor Nathan Barker officiating. Interment will follow at Pisgah Cemetery with Full Military Honors provided by the United States Air Force and the Marion County Veterans Council Honor Guard.

The family of Michael Sivnksty Jr. created this Life Tributes page to make it easy to share your memories.

Michael Sivnksty Jr., 79, of Fairmont, passed away at Fairmont...