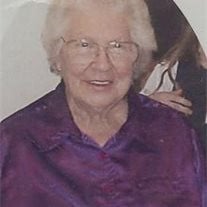 Mary Winemiller Mary Lucille Pheasant Winemiller, 95, of Fairmont, Boothsville Community, passed away on Wednesday June 23, 2010 at her home. She was born in Marion County on February 21, 1915, a daughter of the late Edelbert and Cora Shaffer Pheasant. She was preceded in death by her loving husband, A. Delbert Winemiller who passed in December of 1985. She is survived by two sons, Robert “Sonny” E. Winemiller and his companion Nancy Laulis of Fairmont; and Richard and Beverly Winemiller also of Fairmont; five daughters, Louise and Alexander Williams Jr. of Pittsburgh, Margie Myers of Winfield, Helen Heston of Fairmont, Dianne and Donald Cutlip of Lumberport, and Gloria Heintz of Fairmont; twenty grandchildren, thirty great grandchildren, and seven great great grandchildren, as well as several nieces and nephews. Mary was a cook at many local restaurants in the area including the Twilight Drive-In and Bradford House Restaurant formerly located in the Grants store at the Middletown Mall where she retired from. She was a member of the Sunrise Chapel Church, which she and her late husband Delbert helped build. She also enjoyed gardening, flowers, and bowling. She was a member of the Fairmont Women’s Bowling Association. In addition to her husband and parents, she was preceded in death by a son Marion D. “Bud” Winemiller, five brothers, James Pheasant, Edelbert Pheasant Jr., Pete Pheasant, Ralph Pheasant, and Frank Pheasant, three sisters, Minnie Morgan, Margaret Collins, and Thelma Pheasant, and also two sons-in-law, David Heston and Tom Myers. Family and friends may call at the Carpenter and Ford Funeral Home, 209 Merchant Street, Fairmont on Friday June 25, 2010 from 2:00 - 8:00 pm and on Saturday June 26, 2010 from 10:00 - 11:00 am. Services will be held at the funeral home on Saturday at 11:00 am with Pastor John Snider officiating. Interment will follow at the Mt. Zion Cemetery. The family would like to extend their sincere thanks to Amedisys Hospice Care of Anmoore, WV and also Dale Tobin and the children's choir of Sunrise Chapel. Online condolences may be sent to the family at www.carpenterandford.com

Mary Winemiller Mary Lucille Pheasant Winemiller, 95, of Fairmont, Boothsville Community, passed away on Wednesday June 23, 2010 at her home. She was born in Marion County on February 21, 1915, a daughter of the late Edelbert and Cora Shaffer... View Obituary & Service Information

The family of Mary Winemiller created this Life Tributes page to make it easy to share your memories.