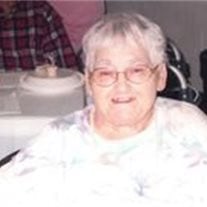 Mary Barniak Mary Catherine Almeda (Hunt) Russell Barniak, of Fairmont, on the 19th day of March 2010 was presented a glorious birthday gift from her Lord. She was called home after a brief illness with family by her side. She was born in Fairmont on March 19, 1931 a daughter of the late Charles Dayton Hunt and Mary “Rosie” Roosevelt (Roderick) Hunt. Mary was a graduate of Fairmont Senior High School. She attended Watson Christ Gospel Mission Church, Sarrietta Community Church and was currently a member of the Hall Street Church of God of Prophecy. She enjoyed quilting, word searches, and watching wrestling (WWE) on television. Mary loved bright yellow cars, her two lovely birds and a fanatic about cows. Mary was a devoted homemaker, mother, grandmother, great grandmother and friend. She adored her grandkids and great grandkids and always had cookies available. She will be missed dearly by all who knew and loved her. She is survived by three sons and two daughters-in-law, Charles A. and Lee Russell of Monongah, Clarence “Bill” and Barbara Russell of Fairmont and Herbert Russell of Grafton; two daughters, Judith Russell of Clarksburg and Cathy Burke of Red Springs, North Carolina; 16 grandchildren, Chelsea Garlow, Tracie Russell, Rhiannon Hoban, Tristan Hoban, Jordan Hoban, Stephan Kelley, Cody Burke, Crystal Edwards, Juanita Grubbs, Bucky Russell, Tiffany Scritchfield, Robert Jr. Scritchfield, Sissy Lilly, Thomas Scritchfield, Randall Scritchfield and Gregory Scritchfield; 23 great grandchildren, 3 great-great grandchildren and several nieces and nephews. Also surviving are four brothers and two sisters-in-law, Raymond Hunt of Fairmont, Lawrence and Phyllis Hunt of Colfax, Dale Hunt of Fairmont and Donald and Helen Hunt of Fairmont. In addition to her parents, Mary was preceded in death by her husband Frank Barniak in November of 1999; a son-in-law, Tom Burke; seven sisters, Violet Toothman, Dora Copen, Phyllis Copen Pyles, Janice Hunt, Texel Hewitt, Maxine Hunt, Grace Hunt, and a brother, Robert Hunt, Sr. Family and friends may call at the Carpenter & Ford Funeral Home, 209 Merchant Street, on Sunday from 1pm to 8pm and on Monday 9am to 11am. The funeral service will be at 11am on Monday, March 22, 2010 at the funeral home with Pastor Carl R. Buckner and Pastor Kay Lake officiating. Interment will follow at the Vincent Cemetery on Vinegar Hill. The family wishes to give special thanks to the Fairmont General Hospital staff and Doctors, along with the staff of Tygart Center of Fairmont for their loving care during her stay. Condolences may be left for the family at WWW.carpenterandford.com

Mary Barniak Mary Catherine Almeda (Hunt) Russell Barniak, of Fairmont, on the 19th day of March 2010 was presented a glorious birthday gift from her Lord. She was called home after a brief illness with family by her side. She was born in... View Obituary & Service Information

The family of Mary Barniak created this Life Tributes page to make it easy to share your memories.