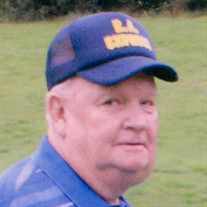 Martin Luther Dalton, 74, of Fairmont, passed away on Tuesday, January 22, 2019, at Wheeling Hospital. He was born on February 06, 1944, in Benton’s Ferry, a son of the late Hough W. Dalton and Mary A. (Hawkins) Dalton. Martin graduated East Fairmont High School in 1963, and later went on to work as a truck driver and was the owner and operator of Conway’s Feed Store in Fairmont, as well as running R.A. Express; he was also a member of the Morgantown Moose Club. Martin will be remembered as having work as his favorite hobby and loving every one of the people he served. Martin is survived by his wife of 40 years, Ruth Ann Dalton. He is also survived by daughters: Michelle Harold and her husband Michael, of Georgia, and Stephanie Dalton, of Georgia; step-daughter, Jennifer Potozny and her husband Justin, of Fairmont; step-son, Ron Wells, of Barrackville; brother, John Dalton and his wife Judy, of Benton’s Ferry; brother-in-law, Carl Flynn, of Benton’s Ferry; grandchildren, Abby and Ashley Harold, of Georgia; and several loving nieces and nephews. In addition to his parents, Martin was preceded in death by brother, Rick Dalton, and sister, Kathy Flynn. Family and friends are welcome to call at Carpenter and Ford Funeral Home, 209 Merchant Street, Fairmont on Friday from 5 p.m. – 8 p.m., and Saturday from 10 a.m. – 11 a.m., with services taking place at 11:00 a.m. on Saturday, January 26, 2019 at the funeral home, with Pastor Jeff Perine officiating. In keeping with Martin’s wishes, he will be cremated following the service.

The family of Martin Luther Dalton created this Life Tributes page to make it easy to share your memories.

Martin Luther Dalton, 74, of Fairmont, passed away on Tuesday,...