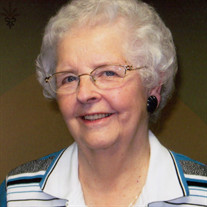 Martha Jean (Davis) Cox, 89, of Fairmont, passed away at J.W. Ruby Memorial Hospital on August 23, 2018. She was born on January 21, 1929 in Fairmont, the daughter of the late William Herbert Davis and Sylvia (McElfresh) Davis. Martha was a graduate of Fairmont Senior High School and later went on to work at C.P. Telephone Company/Verizon for 36 years, retiring in 1983. She was a devoted member of the Central United Methodist Church, and generously volunteered at Telephone Pioneers and Road to Recovery. She was a proud sister of Beta Sigma Phi and Pythians Sisters. Martha was honored for her work at the Telephone Museum with a room named after her – the “Martha Cox Library”. In addition to her parents, she was preceded in death by her loving husband of 65 years, John Cox Jr. Martha was also preceded in death by sister, Betty Fox; brothers, William Davis and James “Butch” Davis; brothers-in-law, Frank Abruzzino, Frank Mullens Sr, Richard Musgrove, and Richard Valentine; and sister-in-law, Anna Marie (Legg) Davis. Martha is survived by brother, Charles “Jack” Davis and wife Juanita, of Fairmont; sisters, Rebecca Harsh and husband Roger, of Fairmont, Virginia Abruzzino, of Ohio, and Shirley Mullens, of Hurricane; sisters-in-law, Frances Davis, of Fairmont, Evelyn Musgrove, of Fairmont, and Helen Valentine, of Rivesville; and brothers-in-law, Allen Fox, of Fairmont, Roger Thorne and wife Rosemary, of New Jersey, Travis Thorne and wife Karen, of Michigan, and Curtis Thorne, of Fairmont; as well as several loving nieces and nephews. The family would like to extend their gratitude to Wishing Well Assisted Living for their excellent care, with a special thanks to Alice Bissett. Family and friends are welcome to call at Carpenter and Ford Funeral Home, 209 Merchant Street, Fairmont, on Sunday, August 27, 2018 from 2 p.m. – 8 p.m., and Monday, August 27 from 11 a.m. – 1 p.m., with services taking place at 1:00 p.m. at the funeral home, with Pastor Brad Bennet officiating. Interment will follow at Beverly Hills Memorial Gardens. In lieu of flowers, the family asks that contributions be made in memory of Martha to Road to Recovery, c/o American Cancer Society, 122 South High Street, Morgantown, WV 26501.

Martha Jean (Davis) Cox, 89, of Fairmont, passed away at J.W. Ruby Memorial Hospital on August 23, 2018. She was born on January 21, 1929 in Fairmont, the daughter of the late William Herbert Davis and Sylvia (McElfresh) Davis. Martha was... View Obituary & Service Information

The family of Martha Jean Cox created this Life Tributes page to make it easy to share your memories.