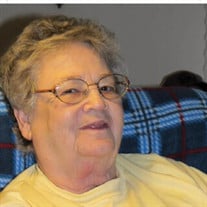 Marjorie Stickles Marjorie Ruth Stickles, 83, of Fairmont passed in her home on June 3, 2018 surrounded by her daughters. She was born on August 1, 1934 in Fairmont a daughter of the late John F. and Ruth (Hartley) Hawkinberry. One of seven children, she graduated from East Fairmont High School in the class of 1953 and married her high School sweetheart, the late Lawrence R. Stickles, who passed on November 18, 2017. The couple were happily married for 64 years. Marjorie was a devoted wife, mother and homemaker. She had worked at Murphy’s in her early years and volunteered at Fairmont General Hospital. She was a member of the Red Hat Society and stayed in touch with her classmates. She enjoyed playing cards with “the girls” at the Marion County Senior Center. She is survived by her loving daughters, Joyce Stickles of Chattanooga Tennessee and Laura Chickerell and her husband Ike of Fairmont; a special daughter-in-law, Cindy Stickles; four grandsons and their spouses, Jason (Kelly) Stickles, Ryan (Vanessa) Stickles, Issac (Trudi) Chickerell, Colin Stickles; and six great grandchildren. Also surviving are her brother, Robert “Skip” Hawkinberry of Fairmont; a sister, Shirley Givens and her husband Joe of Virginia and a several nieces and nephews. In addition to her parents, and husband Marjorie was preceded in death by two brothers, Raymond Hawkinberry, Carl Hawkinberry and two sisters, Phoebe Stickles and Barbara Spencer. The family will receive friends and family at the Carpenter & Ford Funeral Home, 209 Merchant Street, Fairmont on Tuesday from 11am to 1 pm. The funeral service will be at 1pm on Tuesday, June 5, 2018 at the funeral home. Entombment will follow at Grandview Memorial Gardens. Online condolences and memories may be shared with the Stickles Family at www.carpenterandford.com.

Marjorie Stickles Marjorie Ruth Stickles, 83, of Fairmont passed in her home on June 3, 2018 surrounded by her daughters. She was born on August 1, 1934 in Fairmont a daughter of the late John F. and Ruth (Hartley) Hawkinberry. One of seven... View Obituary & Service Information

The family of Marjorie Ruth Stickles created this Life Tributes page to make it easy to share your memories.