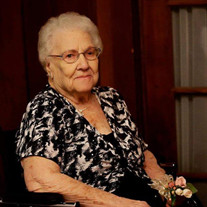 Marion “Bunny” Gertrude Haymond, 98, of Fairmont, passed away on Monday, June 4, 2018 at St. Barbara’s Memorial Nursing Home in Monongah. She was born in Malden, Massachutes on April 20, 1920, a daughter of the late James and Eva Logan. She was preceded in death by her husband Marlin “Bud” Haymond. She was a loving mother and foster mother to many children. Bunny was a gifted seamstress. In her spare time she enjoyed playing cards and visiting with family and friends. Marion is survived by her son, David VanMeter, and his wife Carol, of Monongah; her daughter, Sherry Nicholson, of Austin, Ohio; her grandchildren and their spouses, Tracy (Gary) Hoffman, Bryan (Kelly) Glover, Jeff VanMeter, Lori (Todd) Hogan, and DeAnne (Bernie) Bernardo; several great and great-great grandchildren. Also surviving are two children she raised and their spouses, Max and Jane Eddy, of Ohio, and Susie (Bobby) Ross; a special friend and sister-in-law, Mary Sanders; a special friend of the family, Mary Wilson, and several nieces and nephews. In addition to her parents and husband, Bunny was preceded in death by five sisters, Pat, Dot, Eva, Eleanor and Ginger; a granddaughter, Cindy VanMeter Shuck; and a son-in-law Dorsey Nicholson. Mrs. Haymond’s family would like to thank the staff at St. Barbara’s Nursing Home for their care of her during her time with them. Memorial service will be conducted at the funeral home with Sister, Stella Cronauer, CSJ officiating.

The family of Marion "Bunny" Haymond created this Life Tributes page to make it easy to share your memories.