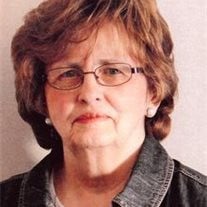 Margaret "Peggy" Vitarelli Mrs. Margaret "Peggy" Ann (Carpenter) Vitarelli, 70, of Fairmont passed away on Wednesday, September 14, 2011 at Monongalia General Hospital in Morgantown. She was born on February 12, 1941 in Waynesburg, Pennsylvania the eldest child of the late John T. Carpenter formerly of Pine Bank, Pennsylvania and the late Mary (Gump) Kodrin formerly of Carmichaels, Pennsylvania. Mrs. Vitarelli was a graduate of Waynesburg High School; obtained a Bachelor of Science degree in Psychology from Fairmont State University ; and a Masters degree from West Virginia University in Guidance and Counseling. She worked thirty two years for the Marion County Board of Education as a school teacher and counselor. She also taught several years at Fairmont State University as an adjunct professor in Psychology and Sociology. She was a lifelong member of the Oakwood Road Church of Christ where she taught the ladies class and Sunday school classes. She loved children, specializing in the counseling of troubled teens, and she also served as a counselor at Mannington Middle School. Peggy is survived by her loving husband of 51 years, Terry J. Vitarelli and three children; her son, T. Jay Vitarelli and his wife Robin of Ft. Lauderdale, Florida; her son, Jan M. Vitarelli and his wife Theresa of Greensboro, North Carolina; her daughter, Joy (Vitarelli) Narmore and her husband Brett of Canal Fulton, Ohio, and by her eight very special grandchildren, Megan, Matthew, Julianne, Mark, Jennifer, James, Isaiah and Benjamin. She is also survived by a brother, John Carpenter and his wife Micky of Arkansas and two sisters, Linda "Susie" Baer and her husband, Don of Morgantown and Debbie Bissett of Waynesburg and many nieces and nephews. Peggy's family will receive friends at the Carpenter & Ford Funeral Home, 209 Merchant Street, Fairmont on Thursday from 5pm to 9pm and Friday 2pm to 8pm. Funeral services will be on Saturday, September 17, 2011 at 11:00 am at the Oakwood Road Church of Christ with Evangelist Brent Gallagher officiating. Interment will follow at Mt. Zion Cemetery. Online condolences may be sent to the Vitarelli family at www.carpenterandford.com

The family of Margaret "Peggy" Vitarelli created this Life Tributes page to make it easy to share your memories.