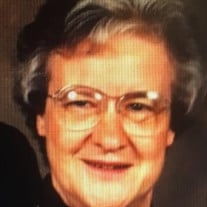 Dr Lorita Duffield Jenab, 92, of Morgantown, West Virginia expired on Sunday, June 12, 2022, at Fitzwater Assisted living Facility in Fairmont. She was the daughter of the late H.V. (Jack) and Faith Duffield of Duck, WV. She was preceded in death by her parents; her son, David Jenab of Morgantown; and her brother, Emery Duffield of Wilsie. She is survived by her husband, Parviz Jenab of Morgantown; her sisters, Arlene Johnson of Cleveland, Ohio, Dianne Nottingham of Duck, WV, and Karen Dawson of Hedgesville, WV; and several nieces and nephews. She was a native of Clay County, West Virginia and earned the BSN degree from Alderson Broaddus, MSN degree from Case Western Reserve University and a EdD degree from Teachers College, Columbia University in New York. Dr. Jenab chaired the Nursing Department at Alderson Broaddus for four years and was appointed Dean of the School of Nursing at West Virginia University in 1968. She served in the dean’s role for twenty-four years. As a senior nursing student in her undergraduate program, she learned there were only three nurses in West Virginia holding a master’s degree. She made a promise to herself that as soon as she could afford to do it, she would get a master’s degree. One year later she enrolled in the master’s program at Case Western Reserve University in Cleveland, Ohio. At this early stage of her career, she recognized her responsibility to do more for the good of nursing and the people of West Virginia. Over the course of her time as Dean, the number of graduates in the baccalaureate nursing program increased five-fold. In 1975, she started the Master of Science of Nursing program and extended the program to distant sites through the Satellite Network. In addition, she organized leaders of the state’s nursing schools and created the Association of Deans and Directors of Nursing Education. This organization coordinates education efforts throughout the state. Dr. Jenab’s work will forever shape the landscape of nursing in West Virginia. A memorial service will be held at the Duffield Cemetery in Duck on the much-loved farm of her childhood. Carpenter and Ford Funeral Home in Fairmont is honored to assist the family with making the arrangements. Condolences and memories may be shared with the family online at www.carpenterandford.com.

Dr Lorita Duffield Jenab, 92, of Morgantown, West Virginia expired on Sunday, June 12, 2022, at Fitzwater Assisted living Facility in Fairmont. She was the daughter of the late H.V. (Jack) and Faith Duffield of Duck, WV. She was preceded in... View Obituary & Service Information

The family of Dr. Lorita D. Jenab created this Life Tributes page to make it easy to share your memories.