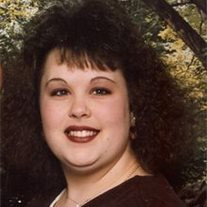 Linda L. Wolford Long Linda L. Wolford-Jarrett Long, 36 of Fairmont and formerly of Clarksburg passed away on Saturday, April 17, 2010 at Tygart Center at Fairmont. She was born on December 15, 1973 in Fairmont a daughter of Robert E. and Janice McIntire Wolford of Fairmont. Linda was a homemaker, wife and devoted mother. She has also worked as a Photographer at Olan Mills Studios in K-Mart. She was a 1992 graduate of East Fairmont High School. She was a member of the Winfield United Methodist Church. Her many interests included collecting elephants. She is survived by her husband, Shawn Long of Clarksburg, her children, Abby Jarrett of Fairmont, Seth Jarrett of Fairmont, Paige Glenn of Pennsylvania; her step son, Chase Long of Buckhannon; her brothers, and their spouses, Wendell and Suzan Wolford of Bridgeport, Doug Wolford and Mark Kretz of Lansing Michigan and David and Kristi Wolford of Fairmont; her sister and her spouse, Jennifer and Dave Keefover of Fairmont; nieces and nephews, Alex Keefover, Haley Keefover, Zach Wolford and Tristan Wolford; her children’s grandmother, Marge Jarrett of Fairmont; several aunts, uncles and cousins and her dog Sophia. Linda was preceded in death by her grandparents, Roy and Mabel Wolford and Hartis and Lora McIntire. Linda’s family would like to thank the staffs of Tygart Center and Hospice Care for their wonderful care during her illness. Friends and family may call at the Carpenter & Ford Funeral Home, 209 Merchant Street Fairmont on Tuesday from 4pm to 9pm and Wednesday 11am to 1pm. The funeral service will be at 1pm on Wednesday, April 21, 2010 at the funeral home with Pastor Tommy Baron officiating. Interment services will follow at Grandview Memorial Gardens. Condolences may be left for Linda’s Family at www.carpenterandford.com..

Linda L. Wolford Long Linda L. Wolford-Jarrett Long, 36 of Fairmont and formerly of Clarksburg passed away on Saturday, April 17, 2010 at Tygart Center at Fairmont. She was born on December 15, 1973 in Fairmont a daughter of Robert E. and... View Obituary & Service Information

The family of Linda Wolford-Jarrett Long created this Life Tributes page to make it easy to share your memories.