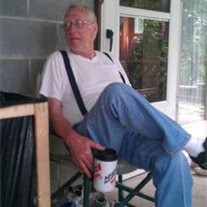 Lawrence Ray Thrash Sr. Lawrence Ray Thrash Sr., 76, of East Grafton Road, Fairmont, passed away Tuesday, August 23, 2011 at his home. He was born in Fairmont on June 16, 1935, a son of the late Carl Willis and Vaughnita Marie (Yost) Thrash. Lawrence served his country with the United States Army for three years as a Staff Sergeant, then transferred to the United States Army Air Corps. He was retired from Clark American, working as a production manager. He was a graduate of East Fairmont High School and was a member of VFW Post 7048 of Fairmont. He was an avid bowler and enjoyed playing golf as well. He is survived by one son, Lawrence Ray Thrash, Jr. of Marietta, GA, two daughters, Vera Louise West and her husband Michael of Mt. Jewett, PA and Carla Christine Marie Thrash of Marietta, GA, four grandchildren, Michael Terry "TJ" Jenkins Jr., Devin Ray Jenkins, Carl Willis Thrash II, and Anna Rae Thrash, and three great-grandchildren, Tehya Jenkins, Aiyana Jenkins, Mia Jenkins. Also surviving is a brother, Lewis Allen Thrash and his wife Sue of Fairmont In addition to his parents, he was preceded in death by his loving wife, Cora Jane (Kite) Thrash, and a brother, Leonard Thrash. In lieu of flowers, memorial donations may be made in Lawrence's memory to Peoples Hospice, PO Box 1680, Clarksburg, WV 26302. Family and friends may call at the Carpenter and Ford Funeral Home, 209 Merchant St., Fairmont on Wednesday from 6-9 pm and on Thursday from 10-11 am. The funeral service will be held in the funeral home on Thursday, August 25, 2011 at 11 am with Pastor Carl Radcliff officiating. Flag folding rites will be conducted by the Marion County Veterans Council Honor Guard. Interment will follow at Grandview Memorial Gardens in Fairmont. Online condolences may be left for the family at www.carpenterandford.com

The family of Lawrence Ray Thrash, Sr. created this Life Tributes page to make it easy to share your memories.