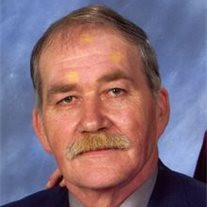 Greg Hayes Lawrence Gregory “Greg” Hayes, 62, of Farmington passed away on Thursday, December 17, 2009. He was born in Marion County on April 1, 1947 a son of the late Chester Von and Opal Bell Ott Hayes. He was self employed as a painter in the Marion County area. Greg was an accomplished Gospel Singer, singing with Faith Mountain Music and Born Again Music Groups. He was a member of the Monongah Baptist Church. He sang at various nursing homes in the area especially at The Fairmont Arbors. Greg loved the outdoors and working in the yard and on his home. He is survived by his loving wife of 40 years Anita Lilley Hayes; one son John Harker of Fairmont; three daughters Wendy Longwell and her husband James, Cindy Metheny and her husband Larry of Roanoke, Virginia and Pamela Donia and her husband Mark of Hagerstown, Maryland; three brothers Donald Gordon Hayes and his wife Barbara of Monongah, Chester Von Hayes and his wife Roxanne of Colfax, and John A. Hayes and his wife Evelyn of Fairmont; one sister Kathleene King of Taylor County; five grandchildren Aaron Metheny, Jay Longwell, Maxine Topardo, Amanda Harker, and Amber Longwell; two great grandchildren Hannah Metheny and Uriah Joseph Metheny; and several nieces and nephews. In addition to his parents he was preceded in death by one son Joseph Harker; one brother Ronald Hayes; and one brother-in-law Charles King. Friends may call at the Carpenter and Ford Funeral Home on Sunday from 5-9 p.m and Monday from noon to 2p.m. Funeral services will be held at Carpenter and Ford Funeral Home, 209 Merchant Street, on Monday, December 21, 2009 at 2:00 p.m. with Pastor Bill Toothman, Pastor Dean Brannen and Pastor David Huckins officiating. Burial will follow at Nuzum Cemetery. In lieu of flowers memorial contributions may be made to the Hayes family. Online condolences may be sent to www.Carpenterandford.com

The family of Lawrence Gregory Hayes created this Life Tributes page to make it easy to share your memories.