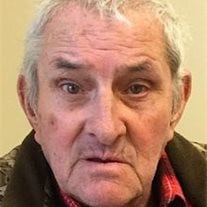 Kenneth VanGilder Kenneth Ray VanGilder, 83, of Morgan Ridge Community passed away February 14, 2018 at his home. He was born on December 7, 1934 in Fairmont the son of the late Jacob "Cub" VanGilder and Reeva Verelene (Brown) VanGilder. He retired from the Carpenter's Local #428 after over 30 years of service. He served as business agent and president of the local. Mr. VanGilder was most happy on his farm. He also enjoyed coon and deer hunting, target shooting, raising cattle, gardening, spending his summers in the hay fields and working puzzles at the kitchen table. He is survived by his loving wife, Joyce Lucille (Moran) VanGilder; a son, Karl E. VanGilder and his wife Vanessa and a daughter, Joyce Ann VanGilder, all of Charleston. Kenneth is survived by his children from a previous marriage, Donald Ray VanGilder, David M. VanGilder and Connie Blankenship. Also surviving are his brothers and their spouses, Harold and Adeline VanGilder of Maryland, Donald "Gene" and Pam VanGilder of Fairmont and Ronald VanGilder of Fairmont; two sisters, Mary and Ralph Newman of Fairmont and Patty Thompson of Maryland; a brother-in-law, Ewell Whiseman. In addition to his parents, he was preceded in death by two sisters, Rozanna "Rose" Whiseman and Betty Lou Reaser; two brothers, Lawrence "Punk" Van Gilder and Paul Earl VanGilder and two brothers-in-law, James Moore and Leroy Reaser. Family and friends may call at the Carpenter & Ford Funeral Home, 209 Merchant Street Fairmont on Friday from 3pm to 8pm and Saturday from noon to 2pm. The funeral service will be at 2pm on Saturday, February 17, 2018 at the funeral home with Pastor Ruth Hall officiating. Interment will follow at Mt Zion Cemetery. Online condolences may be shared with the VanGilder Family at www.carpenterandford.com

Kenneth VanGilder Kenneth Ray VanGilder, 83, of Morgan Ridge Community passed away February 14, 2018 at his home. He was born on December 7, 1934 in Fairmont the son of the late Jacob "Cub" VanGilder and Reeva Verelene (Brown) VanGilder. He... View Obituary & Service Information

The family of Kenneth Ray VanGilder created this Life Tributes page to make it easy to share your memories.