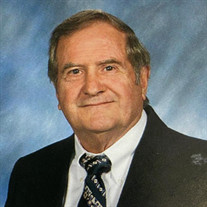 Kenneth Goff “Bud” Jones, Jr., 82, of Fairmont, went home to be with his Lord and Savior on Saturday, April 24, 2021 at Tygart Center Fairmont Campus. He was born January 12, 1939, in Fairmont; the son of the late Kenneth and Leona Jones. Ken was a 1957 graduate from Rivesville High School. He also graduated from Fairmont State University. Ken was the owner and operator of Jones Construction. He was an active member of Trinity Assembly of God Church. Ken loved to go fishing in Elkins with his friends. Ken is survived by his grandchildren, Taylor Weidle, Tara Gibbs and Trey Weidle, all of Germantown, Ohio. Ken always considered Julie Powell to be like his granddaughter. Ken is also survived by his great grandchildren, Bradyn, Brody and Braylee Gibbs; his best friend, Dolly Powell of Fairmont; his nephews, Michael Kosegi and his wife, Sharlene of Mason, Ohio and Jimmy Kosegi and his wife, Kathy of Hillsboro, Ohio. In addition to his parents, Ken was preceded in death by his wife, Margaret (Susan) Jones; his son, Kenneth Jones; his daughter, Cynthia M. Weidle; his son-in-law, Ron Weidle, Jr.; and his sister, Margie (Jones) Kosegi. In keeping with his wishes, Ken will be cremated. There will be no visitation or services.

The family of Kenneth Goff "Bud" Jones Jr. created this Life Tributes page to make it easy to share your memories.