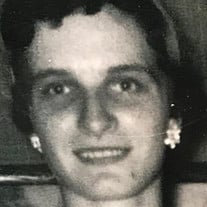 Judith Dee “Judy” Shaffer, 80, of Fairmont, passed away on Sunday, August 11, 2019, at Fairmont Health and Rehabilitation Center. She was born July 1, 1939, in Fairmont, a daughter of the late Marvin R. Nichols and Iva G. (Carpenter) Nichols. After graduating Fairmont Senior High School, Judy went on to work at Westinghouse/North American Philips as a Line Operator in the Glass Plant for seven years, as well as being a loving homemaker. She was a devoted member of the Central Christian Church in Fairmont. Judy is survived by her husband, John C. Shaffer of Fairmont, whom she married on August 04, 1956. She is also survived by sister, Joanie Audia, of Morgantown; sisters-in-law, Susan Loughey and Joann Nichols; grandchildren: Robert Rowley, Jackie Rowley, and April Garnish; six great-grandchildren; and several nieces and nephews. In addition to her parents, Judy was preceded in death by her daughter, Kimberly Ann Whitten; son, Camden Shaffer; her twin brother Jack Nichols; her brother, Richard “Dick” Nichols; and her sisters, Patty Nichols, Carol Omdick, and Marvel Lee Fox. In lieu of flowers, donations may be made to St. Jude’s Children’s Research Hospital at 501 St Jude Place Memphis, TN 38105. In keeping with her wishes, Judy will be cremated. A memorial service will be held at Carpenter and Ford Funeral Home, 209 Merchant St, Fairmont, on Saturday, August 17, 2019 at 2:00 p.m. Carpenter and Fort Funeral Home is honored in being trusted with the arrangements.

The family of Judith Dee Shaffer created this Life Tributes page to make it easy to share your memories.