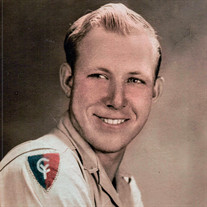 Joseph Weeks, 92 of Fairmont passed away peacefully at his home on Thursday Nov. 22, 2018. Joe was born in Fairmont on May 24, 1926, son of the late Joseph and May Etta Weeks. A World War II US Army Combat Infantry Veteran serving in the Philippines, Joe returned home and continued to serve his community and country as a pilot and Commander of the Civil Air Patrol, teaching many local pilots to fly. In the early 1960s, he became V.F.W. Post 7048 Commander. Joe spent 44 proud years as a coal miner working at Barrackville and Martinka Mines. He was a member of the United Mine Workers of America for over 60 years. Known for a quick wit, sense of humor, and firm handshake, those strengths helped him beat cancer twice. He gave back by transporting many cancer patients throughout the region as a volunteer driver for the American Cancer Society. He attended Mt. Harmony Community Church where he was a member of the choir and past board member. He enjoyed spending time with his family and friends, including those at the Marion County Senior Center. He was preceded in death by his wife of 63 years, Beulah Weeks; son, David Weeks; and great-grandchild, Michael Thorsten, his brother, Herman Weeks and a sister, Dorothy Smith. He is survived by three daughters: Jo Ann Walsh and husband James, of Goose Creek, SC; Helen Rundle and husband Daniel, of Fairmont; and Amy Martin and husband Brian, of Grafton; six grandchildren: Jennifer Thorsten and husband John, James Walsh and wife Barbara, of Goose Creek, SC; Jessica Wofford and husband Matt, of Greer, SC; Daniel Rundle, of Portland, OR; Jonathan Rundle and wife Whitney, of Seattle, WA; Crystal Weeks, of Fairmont; eight great-grandchildren and three great-great-grandchildren. Family will receive friends at Carpenter & Ford Funeral Home, 209 Merchant Street, Fairmont, WV on Sunday from 1pm to 8pm and Monday from 10 am to 11am. The funeral service will be at 11am on Monday, November 26, 2018 at the funeral home with Pastor Ruth Hall officiating. Interment will follow at Beverly Hills Memorial Gardens in Westover, with Full Military Honors conducted by the Marion County Veterans Council Honor Guard and United States Army Reserves from Camp Dawson. A special thank you to all the nurses and aides at Amedysis Hospice.

Joseph Weeks, 92 of Fairmont passed away peacefully at his home on Thursday Nov. 22, 2018. Joe was born in Fairmont on May 24, 1926, son of the late Joseph and May Etta Weeks. A World War II US Army Combat Infantry Veteran serving in the... View Obituary & Service Information

The family of Joseph Weeks created this Life Tributes page to make it easy to share your memories.

Joseph Weeks, 92 of Fairmont passed away peacefully at his home...