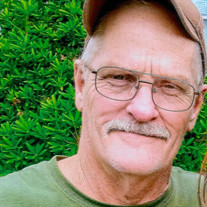 Joseph Matthew “Matt” Slater Sr., 57, went to be with the Lord at his residence on Friday, September 04, 2020, in Rivesville after a two-year battle with health issues. He was surrounded by love and family at his bedside. He was born on January 06, 1963, in Fairmont, a son of the late John Wallace and Olive Belle Slater. On April 09, 2005, he married the love of his life, Tammy, in Rachel, West Virginia. Matt was a vivid outdoorsman and enjoyed riding ATVs, hunting, fishing, animals, music, and spending time with family and friends. He took pleasure in exploring life with Tammy by his side. He was a carpenter by trade for over 35 years. His new mission takes him to a wonderful place where he will be hunting, gardening, and reminiscing to his heart’s content. He is survived by his wife, Tammy Slater; his children: Joey (Bethany) Slater, of Joetown, Josh Slater, of Joetown, John Slater, of Joetown, April Sapp, of Fairmont, Courtney Sapp, of Fairmont; daughter-in-law, Stephanie Slater, of Idamay; his eight grandchildren: Joseph III, Megan, Matthew, Hailey, Harley, John, Reagan, and Jaylynn; nine siblings: Connie (Larry) Sayre, of Clarksburg, Linda Lowe, of Mannington, John (Debbie) Slater, of Farmington, Cindy (Benny Campbell) Slater, of Seven Pines, Terry (Lewis) Simmons, of Mannington, Tim (Patty) Slater, of Hundred, Danny (Katie) Slater, of Joetown, Toni (Harry) Ledsome, of Fairmont, Mark (Alice) Slater, of Mannington; adopted brother, Jerry (Susan) Garrett; his uncle, Wilbur C. Shaffer (Carolyn), of Moultrie, Georgia; as well as several nieces, nephews, cousins, and friends. In addition to his parents, he was preceded in death twin grandsons, Carl Joseph and Carson Michael; his stepfather, William Cross; his mother-in-law, Marie Morgan; his brother-in-law, Donald Lowe Sr.; and special friend, Bill Melcus. Carpenter and Ford Funeral Home is honored in being trusted with all arrangements. In keeping with his wishes, Matt will be cremated with a memorial service to be held at a later date. The family would like to thank all of the nurses who assisted in his care.

Joseph Matthew &#8220;Matt&#8221; Slater Sr., 57, went to be with the Lord at his residence on Friday, September 04, 2020, in Rivesville after a two-year battle with health issues. He was surrounded by love and family at his bedside. He was... View Obituary & Service Information

The family of Joseph Matthew "Matt" Slater Sr. created this Life Tributes page to make it easy to share your memories.