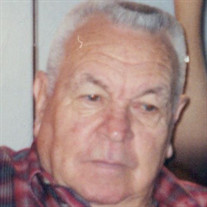 Johnnie Ray “J.R.” Harsh Sr., 93, of Fairmont, passed away on July 10, 2019 at J.W. Ruby Memorial Hospital. He was born on June 02, 1926, in Parsons, a son of the late Arden Ray Harsh and Delphia May (Runner) Harsh. J.R. worked for several companies throughout his career but retired from J.F. Allen as a Heavy Equipment Operator. He will be remembered for his love of farming and having lunch with fellow retirees monthly, but most of all, for being a loving father, grandfather, and great-grandfather, and spending time with his family. In addition to his parents, he was preceded in death by his devoted wife, Doris Lila (Rogers) Harsh, who passed away on November 21, 2012. He was also preceded in death by brothers: Hugh Harsh, Guy Harsh, and Cecil Harsh. He is survived by sons, Johnnie R. Harsh Jr. and wife Rosalynd, and Roger Harsh and wife Kimberly, all of Fairmont. He is also survived by grandchildren: McKenzie Thorn, Brittany Homchenko and husband Joseph, Andrea Haymond and husband Robert; great-grandchildren: Alexcia Murphy, Nathaniel Murphy, Kayleigh Sapp, Ashton Homchenko, Mackinze Homchenko, and Clover Homchenko; nieces and nephews: David Harsh and wife Florence, Leslie “Roger” Harsh and wife Becky, Joni Davis, Diane Adams, Cindy Merrill, Crystal Gearhart, Sheila Pizatelli, and Billy Rogers. Family and friends are welcome to call at Carpenter and Ford Funeral Home, 209 Merchant St., Fairmont, on Saturday from 1 p.m. – 8 p.m., and on Sunday from 12 p.m. – 1 p.m., with services being held on Sunday, July 14, 2019 at 1:00 p.m. at the funeral home, with Pastor Randy Vincent officiating. Interment will follow at Ross Cemetery.

The family of Johnnie Ray Harsh Sr created this Life Tributes page to make it easy to share your memories.