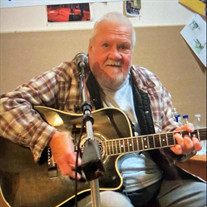 John Robert Toothman, 77, of Bunner Ridge Community died on Tuesday, September 14, 2021 at J.W. Ruby Memorial Hospital in Morgantown. He was born in Fairmont on April 21, 1944 a son of the late Virgil Hamilton and Edith Alma VanGilder Toothman. John loved to play music with his friends and family. He was his most happy with a guitar in his hand. He was a woodworker, carpenter, and house builder. Several family members and friends have pieces that he has made for them over the years. He is survived by his loving wife of 57 years Kathleen Lloyd Toothman; two sons James Robert Toothman and his wife Jennifer of Tennessee and Joseph Paul Toothman and his wife Juanita of Fairmont; two daughters Monica Jean Bell and her husband James of Fairmont and Katy Jonette Fox and her husband Shane of Fairmont; four sisters-in-law Harriet Toothman, Violet Toothman, Amy White and her husband Jim and Marjorie Darrah and her husband Mike; mother-in-law Monica Jean Lloyd; nine grandchildren Dustin Toothman, Chelsea Ice, Megan Toothman, C.D. Martin, Lane Fox, Owen Fox, Cody Bell, Emma Bell and Jessica Toothman; and several nieces, nephews and good friends. In addition to his parents, he was preceded in death by two brothers Donald Ray Toothman and William “Bill” Toothman; brother-in-law Joseph Fred Lloyd, nephew John Edward Lloyd, and father-in-law Slyvester Lloyd. In keeping with his wishes, he will be cremated, and a memorial service will be held at a later date. Carpenter and Ford Funeral Home is honored to directing services. John was a devoted Christian, who made his peace with God before he passed. He is in heaven and wants us all to join him. He will be greatly missed by us all.

The family of John Robert Toothman created this Life Tributes page to make it easy to share your memories.