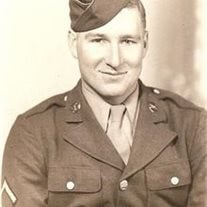 John Junior Linn John Junior Linn, 89, of Fairmont passed away Sunday, November 13, 2011 at the Rosewood Center in Grafton. He was born in Hammond, Marion County on June 23, 1922, a son of the late Harriet Isabelle Linn. John proudly served his country with the United States Army during World War II in Italy where he was a T5 Radio Man. He received the Purple Heart Medal, Distinguished Unit Badge and Good Conduct Medal. He was retired from Sharon Steel where he worked as a millwright and he had also worked at Hammond Brick Company as a Laborer. He was a member of the Hebron Baptist Church. He enjoyed going to auction sales and farmers markets, gardening, tending to flowers, and was an avid cat lover, especially his cat, Sam. He is survived by two brothers, Charles Brady Linn of Fairmont and Bernadine Dale "B.D" Linn of Fairmont, two sisters, Clara Belle Musgrove of Fairmont and Madaline Lucille Wolfe of Garrettsville, Ohio, as well as several caring nieces and nephews, great nieces and nephews, including a special great niece, Brandi Hoskinson. In addition to his parents, he was preceded in death by one brother, Gale Eugene Linn, three sisters, Mildred Satterfield, Mabel McRobie and Beulah Williams, two sisters-in-law, Mary Linn and Marjorie Linn and five brothers-in-law, Harry Wolfe, Gerald Musgrove, Onnie Williams, Jesse Satterfield, and Calvin McRobie. Family and friends may call at Carpenter and Ford Funeral Home, 209 Merchant St., Fairmont on Tuesday from 1-9 pm and on Wednesday from 11 am – 1 pm. The funeral service will be held in the funeral home on Wednesday, November 16, 2011 at 1 pm with Pastor Jim Zinn officiating. Interment will follow at the Linn Family Cemetery where full military honors will be conducted by the Marion County Veterans Council Honor Guard. Online condolences may be left for the family at www.carpenterandford.com

The family of John Junior Linn created this Life Tributes page to make it easy to share your memories.