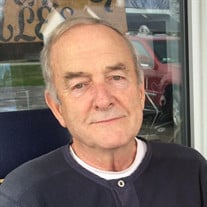 John Robert Hart, 81, of Fairmont, passed away on Friday, October 15, 2021. He was born October 5, 1940, in Mannington, West Virginia, the son of the late Aubrey Hart and Pauline (Waters) Haun. John spent his early years in Catawba, attending “Catawba Tech” with his sister, Mary Jo (Hart) Powell (deceased), brothers Donnie and Ron Haun, and his best friend, Tommy Tucker, along with many other friends who he remembered fondly. He graduated from East Fairmont High School. He worked as a maintenance mechanic and a production/maintenance supervisor over forty years for Westinghouse later becoming Philips Lighting from which he retired. He developed a life-long love of farming from his father-in-law, Gaynon Bunner, and others in his first wife’s, Cyrene (Bunner) Hart, extended family. John and Cyrene were married January 6, 1961, and were married 43 years until her passing in 2004. They had four children, Michele (Scherer), Jeffrey (Hart, deceased), Roger (Leeson) and Andrea (Hart). Michele’s husband, Robert, and their children, Tyler, Caroline, and Wyatt were dearly loved. John and Cyrene had many fun adventures with family and friends especially Ron and Susan Haun, Tommy and Linda Tucker, and Earl and Diana Walker. Whether it was a dinner, a party or events such as making apple butter, both enjoyed having others in their home. In later years, he met and married Debra Dicken Hart and they were married 14 years until his passing. They shared a love of travel including their annual trip to Berkeley Springs, the beach, as well as special trips to Greece and Alaska. He loved and cared for his new, expanded family: Tammy Linn (Greg), Diana Fortier (Michael) and Kimberly Skidmore (Josh) their children Danielle, Dylan and Faith Friend, Madison and Maximus Fortier, and Annabelle, Reese and Luke Skidmore. John loved people, teasing, encouraging, and making them laugh. He never met a stranger. Mostly he loved telling people about God and sharing his faith by opening his home, serving the church, and always lending a hand whenever it was needed. He enjoyed cooking and grilling, projects of all kinds and was talented in many areas. The family would like to express our deepest appreciation for the many individuals who provided love and support during John’s long illness including, but in no way limited to, Dave Higginbotham, Joann Thompson, Judy Marshall, Millie Cochran, Charlotte Grove, Marty Fleming, the wonderful staff at Assisted Living at Evergreen and West Virginia Caring, our Morgantown church family, and friends. John was very thankful and appreciative. Family and friends are welcome to call at Carpenter and Ford Funeral Home, 209 Merchant St., Fairmont, on Tuesday from 1:00 – 8:00 p.m. and on Wednesday, October 20, 2021, from 12:00 p.m. until the time of the funeral service at 1:00 p.m., at the funeral home. Interment will follow at Mt. Nebo Cemetery.

The family of John Hart created this Life Tributes page to make it easy to share your memories.

John Robert Hart, 81, of Fairmont, passed away on Friday, October...