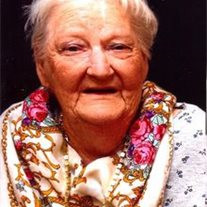 Jessie Suppa Jessie Mae (Bingamon) Suppa, 84, of Kingmont Community, Fairmont, passed away Thursday June 10, 2010 at John Manchin Sr. Health Care Center. She was born March 9, 1926 in Kingmont a daughter of the late Robert B. and Julia E. O’Day Bingamon. Jessie was a homemaker and devoted mother, grandmother, and great grandmother. She loved her family and enjoyed spending time with them. She is survived by her daughter and son-in-law Julia E. and Donnel Fairman of Fairmont; her granddaughters, Lori A (Martin) Salazar and her husband A J of Houston, Texas, Michelle D. (Fairman) Garlow and her husband Jeff of Fairmont, Amy D Fairman and her companion Jason Eddy of Fairmont and Shawnetta S. Martin of Fairmont; three great grandchildren, Tyler M. Garrett, Robert P. Garrett and David A. Myers; her brother, George C. Bingamon of Kingmont and many nieces and nephews. In addition to her parents, Mrs. Suppa was preceded in death by her husband, Raymond F. Suppa on October 14, 1986; a daughter, Viola Sue Martin and son-in-law, Paul Martin; four sisters, Mary Ann Bingamon, Henora ( Bingamon) Shaver, Patricia (Bingamon) Duskey and Julia “Waneta” (Bingamon) Smith and three brothers, John Joseph Bingamon, James Robert Bingamon and Steve A. Bingamon. Friends and family may call at the Carpenter & Ford Funeral Home, 209 Merchant Street on Saturday from 11am to 2pm. The funeral service will be at 2pm on Saturday, June 12 2010 at the funeral home with Pastor Aaron Trent Davidson officiating. Interment will follow at Grandview Memorial Gardens in Fairmont. Mrs. Suppa’s family would like to extend their heartfelt gratitude to the staff of John Manchin, Sr. Health Care for all the great care and support during her stay. On line condolences may be sent to the Suppa and Bingamon Families at www.carpenterandford.com.

The family of Jessie Bingamon Suppa created this Life Tributes page to make it easy to share your memories.