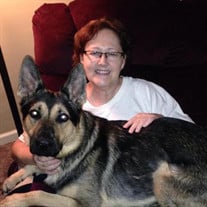 Jean Ann Littleton, 63, of Fairmont, passed away at her home on Thursday, March 14, 2019, after an extended illness. She was born on September 14, 1955, in Fairmont, a daughter of Carlene McCray Jarvis and the late Wiley “Tobe” Jarvis. Ann graduated from Fairmont Senior High School and later went on to work in surgical scheduling in the orthopedic department at J.W. Ruby Memorial Hospital. She was a member of The Baptist Temple and attended South Ridge Church. Ann will be remembered for her love of family, friends, and animals, but most importantly, as being a loving mother. In addition to her mother, Ann is survived by son, Austin Littleton, of Florida; daughter, Rachel Littleton, of Michigan; brothers: Thomas (Gail) Jarvis, of Fairmont, Mike (Pam) Jarvis, of Rivesville, and John (Crystal) Jarvis, of Fairmont, as well as many loving nieces and nephews. In keeping with Ann’s wishes, she will be cremated, with a private memorial service taking place at a later date.

The family of Jean Ann Littleton created this Life Tributes page to make it easy to share your memories.

Jean Ann Littleton, 63, of Fairmont, passed away at her home...