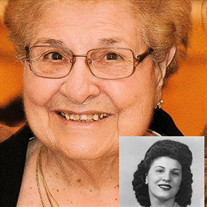 Jean (Savereno) DeCarlo, 92, of Morgantown, went home to our Lord on February 5, 2020. She was born on November 6th, 1927, in Ida May, a daughter of the late George and Rose (DiStephano) Savereno. She was one of six children that was raised in a small coal company house in Carolina, WV. She graduated from Monongah High School in 1945 and went to work for Westinghouse in Fairmont; she later went to Detroit, Michigan, and worked for the Packard Motor Car Company. On returning to West Virginia she worked for a Justice of the Peace and a furniture store in Morgantown. A friend of the family introduced her to Frank C. DeCarlo. They later married in 1948 at St. Theresa Catholic Church and enjoyed nearly 61 years together raising five children. They were members of St. Theresa Catholic Church where their children attended St. Francis grade and high schools. Jean would often work in the school cafeteria. She was a long-time member of the Catholic Daughters. Jean and Frank would plant large gardens. Jean would spend hours canning the vegetables from the garden to enjoy later in the year. She enjoyed and was skilled at cooking and baking. Friends and family loved her Italian cooking, especially her sauce, gnocchis, stuffed artichokes, city chicken, pasta and meatballs, and different homemade soups. Bread day was always a favorite time in the DeCarlo’s house, with bread loafs, various shaped buns, pizza shells, pepperoni rolls, and as a treat during the day, “fritti” fried dough. Her homemade apple and cherry pies were wonderful. At Christmas, she would make a wide variety of cookies that she shared with family, friends, and neighbors. Later her children would help her with the tradition, making such favorites as pizzelles, nut rolls, biscotti, and struffoli, just to name a few. At Easter, she would make the Italian Easter bread in a shape of a basket with dyed hardboiled eggs in the basket, along with the Easter coffee ring cakes. Jean loved shopping, especially for the perfect bargain. After her children were raised, she worked in the children section of J.C. Penney’s, which came in handy when the grandchildren started to arrive. Later, Jean would accompany Frank on a number of trips and events related to Frank’s Knights of Columbus duties as the West Virginia’s State Deputy. After Frank’s death and nearly 61 years of marriage, she remained in their house and became an avid reader. She later moved into assisted living in Morgantown. She is survived by her four children and spouses: Dennis DeCarlo and wife Patricia, of Lexington Park, MD, Michele DeCarlo of Westover, WV, Georgina Young and husband Dave, of Phoenix, AZ, and Frank J. DeCarlo and wife Debbie, of Pittsburgh, PA.; eight grandchildren and spouses: Diana DeCarlo, Patrick DeCarlo and wife Christine, Andrea Diedrich and husband Ryan, Matthew Young and wife Samantha, Katie DeCarlo, Antonio DeCarlo, Dominic DeCarlo, and Angelina DeCarlo; great-grandchildren, Jake and Ava; sister Mary Hewitt and husband Bob; and many nieces and nephews. In addition to her parents, she was preceded in death by her husband, Frank C. DeCarlo; son, Michael DeCarlo; brothers, Tony and Lundix Savereno; and sisters, Christina Liberatore and Francis Pulice. The family is most appreciative and thankful to the staff at The Village at Heritage Point and Harmony at Morgantown senior living communities, and recently WV Caring Hospice for their extremely compassionate care of our mother during her late stage of life. Memorial contributions may be made to St. Francis de Sales Catholic Church Memorial Fund to benefit the church and school. Family and friends are welcome to call at St. Francis Catholic Church, 1 Guthrie Lane, Morgantown, WV, on Tuesday, February 11th, from 1 p.m. – 3 p.m., and 4:30 p.m. – 8:00 p.m., with a Vigil Service being held at 7:30 p.m.; and on Wednesday, February 12, 2020, from 9:00 a.m. until the Mass of Christian Burial at 10:00 a.m. with Father Anthony Cincinnati officiating. Interment will follow at Beverly Hills Memorial Gardens, 1290 Fairmont Rd, Westover, WV 26502.

Jean (Savereno) DeCarlo, 92, of Morgantown, went home to our Lord on February 5, 2020. She was born on November 6th, 1927, in Ida May, a daughter of the late George and Rose (DiStephano) Savereno. She was one of six children that was raised... View Obituary & Service Information

The family of Jean DeCarlo created this Life Tributes page to make it easy to share your memories.