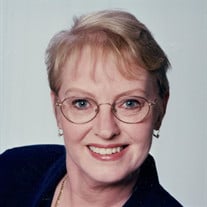 Janet Marie Satterfield, 69, of Fairmont, passed away at her home on September 15, 2018 after a long, courageous battle with cancer. She was born on September 08, 1949 in Elyria, Ohio, the daughter of the late William Carter Satterfield and Anna Marie Sanders Satterfield. Janet was a graduate of East Fairmont High School, Class of 1968; she later received a Master’s in Education, and furthered her education at West Virginia School for the Deaf in Romney. She became known as a passionate teacher, working with hearing-impaired students in the Marion County School system. Janet was constantly involved with furthering the education in her community and country, serving on numerous councils and committees, including: The National Association of Student Councils Conference (2000-2003); Co-Champion of the National Executive Board (2003); service on National Executive Board (2000-2003); service as a National Leadership Camp Counselor at Union College, NY (seven years); WV Association of Student Councils Executive Board (1991-2018); WV Leadership Summer Workshop Staff (1989-2018); and WV Workshop Director (1999-2018). She also served as the President of the Executive Board of Quota International from 1994-2003. In addition, she was very active in Quota International of Fairmont, serving as President and advisor along with other duties. Janet was elected as Lieutenant Governor of the 1st District of Quota International from 2004-2006, and from 2006-2008. Janet was rewarded for her passion and dedication with Regional Advisor of the Year Award (1994); Honorary Member of NHS of East Fairmont (2002); Recognition of Service to Marion County Schools (2002); and the Positively Bee Award from EFHS (2003). Janet is survived by her twin sister, Sharon L. West and her husband, Pat of Fairmont; two brothers, William L. Satterfield and wife Robin of Fairmont and Robert C. “Satch” Satterfield and wife Cathy of Fairmont; her very special nieces and nephews, Brian West and wife Mauria, Kenny West and Ashley, Melissa McArthur, Jennifer Sheets and her husband Troy and Dori Williamson; great nieces and nephews, Arielle Ellis, Eli West, Jensen West, Aleah Marie West, Kaleb West, Nathan McArthur, Jr. and Jett Burson, along with her cats, Boo Boo and Snickers. Family and friends will remember Janet for her love and dedication to children. In accordance with her wishes, Janet donated her body to science at West Virginia University. A Celebration of Janet’s life and memorial service will be held on Monday, September 24, 2018 at Carpenter and Ford Funeral Home, 209 Merchant Street, Fairmont, from 6pm to 8pm with Pastor Jim Zinn officiating. In lieu of flowers, donations may be made in Janet’s memory to American Cancer Society -Marion County Unit, 122 S High St, Morgantown, WV 26501 or W.V. Caring, P.O. Box 760, Arthurdale, WV 26520.

Janet Marie Satterfield, 69, of Fairmont, passed away at her home on September 15, 2018 after a long, courageous battle with cancer. She was born on September 08, 1949 in Elyria, Ohio, the daughter of the late William Carter Satterfield and... View Obituary & Service Information

The family of Janet Marie Satterfield created this Life Tributes page to make it easy to share your memories.

Janet Marie Satterfield, 69, of Fairmont, passed away at her...