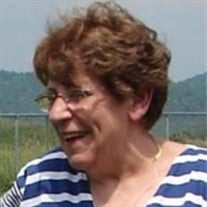 Janet Louise Davis, 79 of Fairmont, passed away on Wednesday, May 12, 2021, at the Healthcare & Rehabilitation Center in Fairmont. She was born in Fairmont on December 18, 1941, the daughter of the late Roy Bailey Davis and Lillie May (Knight) Davis. Janet graduated from East Fairmont High School and then attended Secretarial School. But as fate would have it, she ended up working for Westinghouse until she took early retirement. Janet was a kind and loving person who mentored young girls in her neighborhood. She was a strong and independent person yet also private. Janet’s greatest joys in life were her family and her kitties. In later years, she became full time care giver to her sister Mary Jo. She is survived by her nephew and nieces, Glen Davis, Karen Montelone, both of Ohio and Robin Boyd, of Pennsylvania and several great and great-great nieces and nephews. In addition to her parents, she was preceded in death by four sisters Kathleen Doris Davis, a sister in infancy, Mary Jo Davis & Carolyn Headley; both brothers Allen Davis & LeRoy Davis and a brother-in-law Jack Headley and sister-in-law Virginia “Jenny Sue” Davis. We would like to thank Chris & Joe Martin who checked in with her and assisted with doctor & treatment appointments. Special thanks to Angela & Alexus for assisting both Janet, and Mary Jo over the years and their continued support with the household. In lieu of flowers, the family requests a donation to the Marion County Humane Society, P.O. BOX 905 Fairmont WV. 26554 Family and Friends are welcome to call at Carpenter and Ford Funeral Home, 209 Merchant Street, Fairmont on Friday, June 4, 2021, from 6:00 to 8:00 p.m. A gravesite memorial service will be held at the Oak Grove Cemetery north of Grafton on June 5th, 2021, at 1:00 p.m.

Janet Louise Davis, 79 of Fairmont, passed away on Wednesday, May 12, 2021, at the Healthcare & Rehabilitation Center in Fairmont. She was born in Fairmont on December 18, 1941, the daughter of the late Roy Bailey Davis and Lillie May (Knight)... View Obituary & Service Information

The family of Janet Louise Davis created this Life Tributes page to make it easy to share your memories.

Janet Louise Davis, 79 of Fairmont, passed away on Wednesday,...