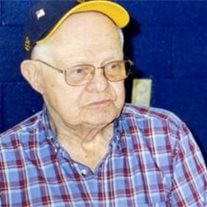 James Wiley James William Wiley of Fairmont passed away on Saturday, December 26, 2009 at his daughter’s home in Millersville. He was born July 17, 1922 of Dennison, Ohio a son of the late William Earl and Dorothy V. Waggoner Wiley. James served in the United States Army from December of 1942 to January of 1946 during World War II. Following his service to our country, he worked at Owens Illinois Glass Plant. He worked in corrugation department and had over 45 years of service before his retirement. He enjoyed following West Virginia University Football and country music. He most enjoyed time with family especially his grandchildren and great grandchildren. James was preceded in death by his loving wife Juanita May Satterfield Wiley on July 10, 2004. He is survived by his children, two sons and daughters-in-law, William Clay and Karen Wiley of Fairmont and Robert Allan and Elizabeth Wiley of Fairmont; his daughter and son-in-law, Beverly Carol and Chuck Villers of Millersville; his grandchildren and their spouses, Belinda Kay and Charles William Husty, William C. Wiley, Jr., Brenna Sue and John F. Board, Michelle Lynne and Steve Brock, Erin Renee’ and Walter Larnerd, James Robert and Christina Wiley and Amanda Lynne Wiley; six great grandchildren and two expected soon; one great great grandson; two brother Austin Dale Wiley of Rachel and Donald Earl Wiley, Sr. and his wife Helen of Fairmont; three sister Mary Margaret Barnes of Morgantown, Jean Carpenter of Fairmont and Sandra Kay Sanson of Fairmont and several nieces and nephews. Friends may call at the Carpenter and Ford Funeral Home, 209 Merchant Street on Sunday from 5-8 p.m. and Monday from 10-11 a.m. A funeral service will be held at Carpenter and Ford Funeral Home on Monday, December 28, 2009 at 11:00 a.m. with Pastor Chris Duckworth officiating. Burial will follow at Grandview Memorial Gardens. Full military rites will be conducted by the Marion County Veterans Council Honor Guard. The family of Mr. Wiley would like to extend their thanks to staff of Hospice Care for their excellent care during a most difficult time. The family may be left condolence online @www.carpenterandford.com

James Wiley James William Wiley of Fairmont passed away on Saturday, December 26, 2009 at his daughter&#8217;s home in Millersville. He was born July 17, 1922 of Dennison, Ohio a son of the late William Earl and Dorothy V. Waggoner Wiley. James... View Obituary & Service Information

The family of James William Wiley created this Life Tributes page to make it easy to share your memories.

James William Wiley of Fairmont passed away on Saturday,...