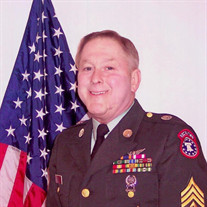 James Allen Smith, 71, of Fairmont, passed away on Monday, August 24, 2020, at J.W. Ruby Memorial Hospital. He was born on November 20, 1948, in Fairmont, a son of the late Earl “Smitty” Leonidas Smith and Viola Virginia (Smallwood) Smith. James attended State Street school and East Fairmont High School. Afterwards, James went on to proudly serve his country in the United States Army with over 20 years of service. He served in the Vietnam Conflict and retired as a first Sergeant in 1988. He later retired from the Times West Virginia as a Distribution Manager. He will be remembered for his love of cooking (especially Vietnamese cuisine), collecting 8 Track tapes (which he was proud to say he had over 8,000 of), Sun Fest at Ocean City with his loving wife Sheila, and Sunday dinners with his family. He will be missed by many. He often left “I Love You” notes for his wife sporadically around their home. He is survived by his wife of 23 years, Sheila (Summers) Smith and her mother, Barbara Summers, whom he loved dearly and routinely took to local music shows and surprised with fresh flowers. He is also survived by his children whom he loved dearly: sons, James Smith Jr. and wife Kendra, of Ohio, Daniel Drew Smith, of Fairmont, Evan Smith and wife Shelby, of Tennessee, and Austin Glenn Smith and wife Rachel, of Tennessee; daughter, Kristin Kolbert and husband Andrew, of Tennessee; brothers, Burl Smith and wife Barbara, Louis Smith and wife Diane, of Shinnston, and Richard Smith and wife Mary Jo, of Alabama; sisters, Lillian Brady, of Fairmont, Lois Freeland and husband Bill, of Florida; sister-in-law, Cathy Henderson and husband Alan, of Fairmont; grandchildren, Hester, Ariel, and Destiny; as well as several loving nieces, nephews, and cousins, and his dog Boo. In addition to his parents, he was preceded in death by two brothers, Harry Smith and Earl Smith; sister, Mildred Merrifield; two neices Harriett A. Smith and Belinda Smith; sister-in-law, Julia Waneta Smith; brother-in-law, Junior A. Brady; and his father-in-law William Summers. Friends and family may call at Carpenter and Ford Funeral Home on Sunday from 1 – 7p.m. and Monday from 10 a.m. to 11 a.m. Services will be held at the funeral home on Monday, August 31, 2020 at 11:00 a.m. with Brother Bruce Hunter officiating. Interment will follow at West Virginia National Cemetery with Full Military Honors conducted by the Marion County Veteran’s Council Honor Guard and the United States Army Reserves at Camp Dawson.

The family of James Allen Smith created this Life Tributes page to make it easy to share your memories.

James Allen Smith, 71, of Fairmont, passed away on Monday, August...