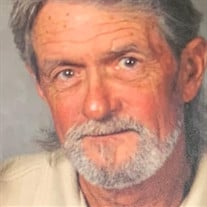 James Barnett “Maverick” “Barney” Martin, 69, of Wallace, formerly of Fairmont, passed away on Sunday, August 18, 2019, at the United Hospital Center in Bridgeport. He was born on July 11, 1950, a son of the late James Wagner Martin and Lois Carolyn (Barnett) Martin. After graduating Fairmont Senior High School, Barney went on to work at the Industrial Resources of West Virginia and as an Iron Worker, as well as a Crane Operator with the Local IOUE 132 out of Clarksburg. He will be remembered for his love of hunting and riding his Harley, but most of all, of his family and friends. Barney is survived by his loving wife of 21 years, Sheila Martin. He is also survived by his sons, James Martin Jr., of Fairmont, and Jack Kerns and his wife Sallie, of Texas; his daughters, Lois Martin and Roberta Stealey, of Fairmont, and Paula Kerns, of Bridgeport; his grandchildren: Katie Fairbee, Garrett Fairbee, Autumn Martin, Logan Martin, Iris Martin, Edgar Kerns, Sean Kerns and Justin Quinn and his wife Sarah and his great-grandchildren, Braxton Puckett, Hazel Quinn and Emma Quinn. Family and friends are welcome to call at Carpenter and Ford Funeral Home, 209 Merchant St., Fairmont, on Friday, August 23, 2019, from 1 p.m. – 8 p.m. In keeping with the family’s wishes, he will be cremated following the visitation.

The family of James "Barney" "Maverick" Barnett Martin created this Life Tributes page to make it easy to share your memories.