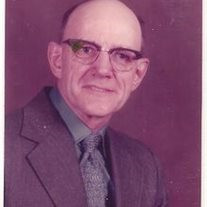 James E. Kisner James Edward Kisner, 93, of Fairmont passed away on Saturday, March 6, 2010 at Pierpont Center at Fairmont Campus. He was born on September 14, 1916 in Fairmont one of thirteen children born to Squire Monroe Kisner and Stella Elizabeth Moran Kisner. James worked with the maintenance crew for the B & O Railroad during WWII and later at the Marion Foundry and Manufacturing Co. and retired as a roofer from S. M. Kisner and Sons. He loved hunting and fishing and working in the garden, growing flowers, cooking and working jigsaw puzzles. James was a member of the Central Christian Church where he was active until entering the nursing home. He loved meeting and talking with people at church and giving the children money for their collection. He is survived by a brother Bernard E. Kisner and his wife Virginia of Fairmont; three sisters, Virginia Short of Fairmont, Kathryn Newbrough of Fairmont and Joyce Watkins of Honolulu, Hawaii; four sisters-in-law, Marie Kisner of Fairmont, Virginia Lee Kisner of Fairmont, Ada Kisner of Ashville, North Carolina and Wanda Kisner of Dade City, Florida and many nieces and nephews and lots of great nieces and nephews. In addition to his parents, James was preceded in death by his step mother, Belle Killer Kisner; a sister, Dora Kisner; brothers and spouses, W. Fred Kisner and his wife Hilda, Rex M Kisner, Richard D. Kisner, Howard A. Kisner and his wife, Reva, Odbert C. Kisner and his wife Ruby, Max D. Kisner Sr. and John W Kisner; and two brothers-in-law, James E. Short and Jennings B. Newbrough. Mr. Kisner’s family would like to express their thanks to Wishing Well/Pierpont Center for their wonderful care and to Don Fitzwater Gracious Living for the years of care while he was a resident there. Friends may call at the Carpenter & Ford Funeral home, 209 Merchant Street, Fairmont on Monday from 2pm to 8pm and Tuesday10am to 11am. The funeral service will be at 11am on Tuesday, March 9, 2010 at the funeral home with Rev. Joshua Patty officiating. Interment will follow at Maple Grove Cemetery. Online condolences may be sent to the Kisner Family at www.carpenterandford.com.

James E. Kisner James Edward Kisner, 93, of Fairmont passed away on Saturday, March 6, 2010 at Pierpont Center at Fairmont Campus. He was born on September 14, 1916 in Fairmont one of thirteen children born to Squire Monroe Kisner and Stella... View Obituary & Service Information

The family of James E. Kisner created this Life Tributes page to make it easy to share your memories.