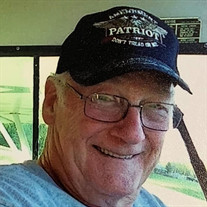 James “Jim” Marner King, 82, of Fairmont, passed away at his home on Monday, June 24, 2019. He was born on December 13, 1936, in Fairmont, a son of the late Marner E. King and Opal L. (Moran) King. After graduating East Fairmont High School in 1955, Jim went on to work Westinghouse/North American Philips as a machinist for 43 years. He belonged to the Rose of Sharon Church. As a child, he could not take his eyes off of the sky when he heard an airplane pass, and in his late 20s he learned to fly; later, he built a two-winged airplane (Skybolt) that he was very proud of and flew often. He also loved to work on old cars and was always building or fixing something – there wasn’t anything that he couldn’t fix. He loved to take the grandchildren up in his airplane and teach them his love of flying. Jim is survived by his loving wife of 40 years, Sharon (Dally) King. He is also survived by sons: Mark King (Cindy), of Mannington, Jamie King (Leah), of Fairmont, Todd King (Kalpana), of Texas; step-son, Patrick Tucker, of Fairmont; daughters: Melanie Lake (Jim), of Rivesville, Susanne Garrett (Steve), of Fairmont, and Cynthia Marsh (Chad), of California; brother, Edward S. King, of Fairmont; sister, Charlotte Vincent, of Fairmont; sixteen grandchildren and sixteen great-grandchildren; and many loving nieces, nephews, and cousins. In addition to his parents, he was preceded in death by sisters: Sarah Stevens, Lucretia Butcher, Betty Henderson, and Jocelyn Rowan; brother-in-law, John Henderson; sister-in-law, Gay King; and great-grandson, Steven Tucker. In keeping with Jim’s wishes, he will be cremated, with a private family service. In lieu of flowers, the family requests that contributions be made to WV Caring at PO Box 760 Arthurdale, WV 26520.

The family of James Marner King created this Life Tributes page to make it easy to share your memories.