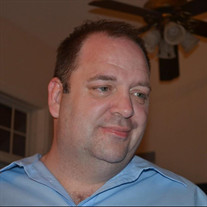 James “Jim” Dwayne Davis, 52, of Stonewood, passed away on Sunday, August 09, 2020. He was born on August 06, 1968, in Clarksburg, a son of the late George W. “Pete” Davis Sr. and Margaret (Bland) Davis. Jim worked as the Program Director for REM WV – Mentor Network for 22 years. He was passionately dedicated to his job. He was a loyal man with the patience of a saint who deeply loved his family. He will be remembered for his love of the holidays, cooking, the beach, traveling, sweets, helping others, but most of all, for the love of his friends. He is survived by his loving and devoted husband, Joseph E. Lipscomb. The couple was together for 20 years and married on September 13, 2013. Jim is also survived by his dogs (sons), Puck and Loki; brothers, George W. Davis Jr., of Clarksburg, and Michael Davis, of Salem; sister, Sheila Davis, of Clarksburg; half-sister, Virginia Bland, of Salem; a large, extended family: niece (who was like a daughter), Barbara Cain and husband Raymond, of Clarksburg, nieces: Cede, Tashy, Jazy, Riah, Rayonna, Bella, Gilly, and a nephew, Thomas; his special friends, Angie, Brenda, and Letitia. In addition to his parents, he was preceded in death by brother, Howard Davis; two sisters, Shirley Potts and Nancy Davis; and brother-in-law, William Bland. In keeping with the family’s wishes, Jim will be cremated, with a private memorial service to be held at a later date.

The family of James "Jim" Dwayne Davis created this Life Tributes page to make it easy to share your memories.