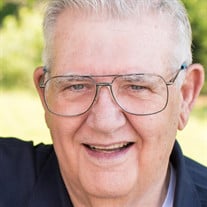 James “Perry” Browning, 76, of Fairmont, passed away at his home with his wife by his side on Wednesday, February 05, 2020. He was born on October 03, 1943, in Clarksburg, a son of the late James Perry Browning and Nadeene (Woodley) Browning. After graduating high school, Perry went on to work as a clerk and operator for CSX Railroad with 38 years of service. He was a Christian and a devout member of the Norway Church of Christ. He loved anything mechanical and became the go-to person to fix anything for his family; he was an avid hunter and fisherman, and loved to swap, trade, and tell many stories. He will be dearly missed by his family, friends, and neighbors. He is survived by his loving wife of 54 years, Sharon (Marquis) Browning. He is also survived by son, David Scott Browning and wife Lori, of Weirton; daughter, Deborah Criss and husband Joe, of Fairmont; brothers, Richard Emerson Browning and wife Brenda, of Fairmont, and David Scott Browning and Andi Brock, of Fairmont; sister, Cathy Chapman, of Fairmont; grandchildren: Robert Browning, Ryan Browning, Scott Browning, Brett Browning, Darby Criss, Hunter Criss, and Kelcie Criss; as well as many loving nieces and nephews. In addition to his parents, he was preceded in death by brother-in-law, William Chapman II. Their family would like to extend their gratitude to Amedisys Hospice for the loving care that was given Perry. In lieu of flowers, memorial contributions may be made to Potter’s Children’s Home, 2350 Nashville Rd, Bowling Green, KY 42101. Family and friends are welcome to call at Carpenter and Ford Funeral Home, 209 Merchant St., Fairmont, on Friday from 4 p.m. – 7 p.m. and on Saturday, February 08, 2020, from 10 a.m. until the service at 11:00 a.m., at the funeral home with Evangelist Andy Miller officiating. Entombment will follow at Floral Hills Memorial Gardens.

The family of James Perry Browning created this Life Tributes page to make it easy to share your memories.

James “Perry” Browning, 76, of Fairmont, passed away at his home...