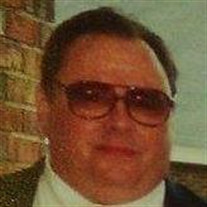 James Alan Ammons, 63, of Fairmont, passed away on November 11, 2018 at the Veteran’s Administration Medical Center in Oakland, Pittsburgh. He was born on January 20, 1955 in Fairmont, a son of the late Robert Paul Ammons and Lovella Maxine Werner. Following graduation from high school, James proudly served his country in the United States Navy, and he later went to work as an industrial mechanic at both Westinghouse and General Electric. He was a member of the Fraternal Order of the Eagles and a past member of The American Legion. James will be remembered as an avid fan of WVU sports and for his cooking. He loved spending time with his family, particularly his grandchildren. James is survived by his wife, Angela Ammons; sons: Jerry (Michelle) Fowler, of Indiana; Greg (Becky) Fowler, of Iowa; James McDowell, of Iowa; Travis McDowell, of Ohio; Jarrod (Kerstin) McDowell, of Florida; Steven (Karen) McDowell, of Georgia; daughters, Sharlene Fore and Annette Crowe, both of Georgia; nephew, Bryan Gibson (Mary), of Gore; as well as many loving grandchildren and great-grandchildren. In addition to his parents, he was preceded in death by son, Lonnie McDowell; and brothers, Ralph Ammons and Eddie Gibson. Family and friends are welcome to call at Carpenter and Ford Funeral Home, 209 Merchant Street, Fairmont, on Wednesday, November 14, 2018 from 6 p.m. – 8 p.m., and Thursday, November 15, 2018 from 12 p.m. – 1 p.m., with services taking place on Thursday at 1:00 p.m. at the funeral home with Pastor Matt Holbert officiating. Interment will follow at Woodlawn Cemetery, with Full Military Honors conducted by the United States Navy and the Marion County Veterans Council Honor Guard.

James Alan Ammons, 63, of Fairmont, passed away on November 11, 2018 at the Veteran&#8217;s Administration Medical Center in Oakland, Pittsburgh. He was born on January 20, 1955 in Fairmont, a son of the late Robert Paul Ammons and Lovella Maxine... View Obituary & Service Information

The family of James Alan Ammons created this Life Tributes page to make it easy to share your memories.