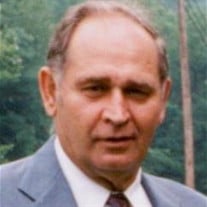 Jack Edward May, 82, of Fairmont, passed away on Monday, April 22, 2019, at J.W. Ruby Memorial Hospital. He was born on February 03, 1937 (the day after Groundhog Day), in Morgantown, a son of the late Frank George May and Anna (Semk) May Reeder. After graduating high school, Jack served his country in the United States Army in Korea. He later went on to work for Owens-Illinois, the West Virginia state government, the U.S. Department of Labor, as a Marion County Commissioner, and as a licensed auctioneer; he was active with the Fairmont Federal Credit Union for over 36 years, and was appointed to the Credit Committee in 1980, elected to the Board of Directors in 1982, serving through March 2008, with his final position as Director Emeritus through May 2016. Jack will be remembered for his love of traveling, farming, raising cows and draft horses, and spending his winters in Florida, but most of all, he enjoyed spending time with family and friends. He was an active member of the Draft Horse and Mule Association and will always be remembered as Colonel Jack May at auctioneer events. Jack is survived by brothers: Walter May (Judy), and Franklin Gerald May (Catherine); grandchildren: Herb Bennett (Kelly), Alisha Ely (Todd), Andrea Cabrera (Chad), Dawn Brookover (Ronnie), Devon Russell (Fred Shelton), Dalton Russell, Derek Russell, Craig Bartholow (Ashley), and Casey Bartholow (Amber); great-grandchildren: Trenton, Austin, Preston, Kembry, Grayson, Bryer, Jacob, Brendan, Allison, Rachel, Caylie, Collin, Caleb, and Colby; nephews and nieces: Frankie May, Melissa May Fulmer, Chris May, and Chad May, Kevin Shuman (Victoria), Kimberly Lehosit (Mark); daughters-in-law: Lynn Russell, Shellie Russell, and Tina Russell; and caregiver and close family friend, Shirley Mainella, as well as several loving great nieces and nephews. In addition to his parents, Jack was preceded in death by wife, Barbara Jean (Kirby) May, who passed away on May 03, 2009. He was also preceded in death by children: Mike Russell, Deborah Russell, and Jimmy Russell; sister, Ramona May Shuman; brother-in-law, William Shuman; and nephew, Michael Todd May. Family and friends are welcome to call at Carpenter and Ford Funeral Home, 209 Merchant St., Fairmont, on Wednesday, from 1 p.m. – 8 p.m., and on Thursday, from 11 a.m. – 1 p.m., with services taking place on April 25, 2019 at 1:00 p.m. at the funeral home with Pastor Scott Krepps officiating. Entombment will follow at Grandview Memorial Gardens with Full Military Honors provided by the Marion County Veteran’s Honor Guard and the United States Army Reserves at Camp Dawson.

Jack Edward May, 82, of Fairmont, passed away on Monday, April 22, 2019, at J.W. Ruby Memorial Hospital. He was born on February 03, 1937 (the day after Groundhog Day), in Morgantown, a son of the late Frank George May and Anna (Semk) May Reeder. After... View Obituary & Service Information

The family of Jack Edward May created this Life Tributes page to make it easy to share your memories.

Jack Edward May, 82, of Fairmont, passed away on Monday, April...