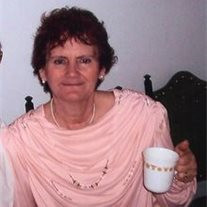 Isabelle Vedis Isabelle (Louk) Vedis, 57, of Grafton passed away on Thursday, March 18, 2010 at Ruby Memorial Hospital in Morgantown. She was born in Elkins on July 4, 1952 one of twelve children born to the late Jessie James Louk and Vada Ellen (Robey) Louk. Mrs. Vedis was a dedicated mother, grandmother, great- grandmother and a “damn good wife”. She had been employed at Companion Care Corporation in Morgantown as a Home Health Aid. She had previously worked at Wishing Well Manor in Fairmont. Isabelle was a licensed Chef and was a licensed C & A. She wrote a book of poems, one of which was published. Her poems were lovingly written to her family and friends. She was a member of the Welcome Baptist Church for many years. She was the “Rock” of her large loving family. “Mamma Deck” will be deeply missed all. She is survived by her loving husband of 5 years, George Vedis; five children, her son, Jacky Dale Miller, Jr. of Texas; her daughters, twins, Ellen Chaney and her husband Leon of Fairmont and Helen Hager and her husband Chuck of Fairmont, Jessica Gordon of Grafton, Jennifer Miller of Grafton; her wonderful grandchildren, Michelle Sylva, Lanessa Silva, Ryan Louk, Tyrell Louk, Briana Chaney, Leah Chaney, Nicole Gordon, Bryan Miller, Kara Miller and Isobell Miller and seven great grandchildren. Also surviving are her brothers, Daniel Louk and his wife Freda of Mannington, Gary Louk and his wife Sue of New Jersey and George Louk and his wife Diane of Virginia; her sisters, Annabelle Dean and her husband Clyde of Fairmont, Rosemary Louk of Fairmont and Ella Shutz of New Jersey. In addition to her parents, she was preceded in death by four brothers, Jessie James Louk, Allen Louk, Frank Louk, Ted Louk and a sister Lucille Louk and several nieces and nephews. Friends and family may call at the Carpenter & Ford Funeral Home, 209 Merchant Street on Monday from 4pm to 9pm and Tuesday from noon to 1pm. Services will be at 1pm on Tuesday, March 23, 2010 at the funeral home with Pastor Paul Mitchell officiating. Following the funeral service, in keeping with her wishes, her body will be cremated. Condolences may be left for the family at WWW.carpenterandford.com

Isabelle Vedis Isabelle (Louk) Vedis, 57, of Grafton passed away on Thursday, March 18, 2010 at Ruby Memorial Hospital in Morgantown. She was born in Elkins on July 4, 1952 one of twelve children born to the late Jessie James Louk and Vada... View Obituary & Service Information

The family of Isabelle Bedis created this Life Tributes page to make it easy to share your memories.