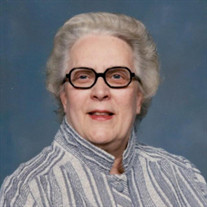 Irene Winifred (Hartzell) Davis, 95, of Fairmont, passed away Thursday, August 20, 2020, at the John Manchin Sr. Assisted Living Facility in Farmington. She was born on May 02, 1925, in Farmington, a daughter of the late Wade and Letha (Duncan) Hartzell. Mrs. Davis was a devoted wife, mother, and grandmother, who helped raise her granddaughters after her daughter died. One of her joys was doing the crossword puzzle with her son, who would read her the clues over the phone when he could no longer visit her because of the pandemic. She also did cryptoquotes, word searches, and was an avid reader prior to her eyesight failing. She was a member of the Meadowdale United Methodist Church H&H Chapel, where she was active in the Women’s Fellowship and Willing Workers when physically able. Mrs. Davis was a 1943 graduate of Farmington High School. She worked several years as an assistant to Dr. J. J. Jenkins Sr. in Farmington and helped him tend to miners injured in the No. 9 mine explosion in 1954. She is survived by her son and caregiver, James M. Davis Jr., of Fairmont; two granddaughters, Meghann Martin and her husband Jeremy, of Fairmont, and Amy Meluzio and her fiancé Denis Logie, of Charlotte, North Carolina; two great-granddaughters, Ava and Harper Martin; and her son-in-law, Carmen Meluzio and his wife Connie, of Fairmont. In addition to her parents, she was preceded in death by husband, James M. Davis, and her daughter, Beth (Davis) Meluzio, in 1990. She was also preceded in death by two brothers, Wade “Bud” Hartzell Jr. and Wayne “Jim” Hartzell; one sister, Elaine Maxwell; and two sisters-in-law, Laura Davis and Eloise Hartzell. The family would like to thank the owners and staff at the John Manchin Sr. Assisted Living Facility for Mrs. Davis’ care the last nine months, as well as Amedysis Hospice Care. They would also like to thank Dr. Govind Patel for his care of Mrs. Davis when she became homebound. Due to the recent pandemic of COVID-19, the family wishes to keep all services private.

Irene Winifred (Hartzell) Davis, 95, of Fairmont, passed away Thursday, August 20, 2020, at the John Manchin Sr. Assisted Living Facility in Farmington. She was born on May 02, 1925, in Farmington, a daughter of the late Wade and Letha (Duncan)... View Obituary & Service Information

The family of Irene Winifred Davis created this Life Tributes page to make it easy to share your memories.