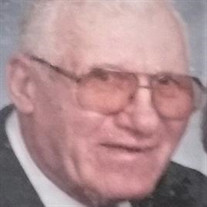 Henry “Harpo” Krushansky, 90, of Port Charlotte, Florida, formerly of Fairmont, passed away on July 30, 2018. He was born on September 28, 1927, in Morgantown, the son of the late Louis Krushansky and Clara (Bozinsky) Krushanksy. Henry proudly served his country in the United States Army, and later went on to work as an UMWA coal miner at Osage, where he later retired. He will be remembered as someone who loved sports, hunting, and fishing. He is survived by his wife, Ruth (Keener) Krushansky, of Florida. He is also survived by son, Ronald Hanisch, of Florida; sister, Nellie (Krushansky) Nels, of Morgantown; many loving nieces and nephews; and close friend, Raymond Corley. In addition to his parents, he is preceded in death by brothers, Benny Krushansky, Charles Krushansky, Louis Krushansky Jr., and Walter Krushansky; sisters, Anna Gantle and Blanch Krushansky; and loving relatives, Shaunda, Chad, and Rick Hanisch. Family and friends are welcome to call Carpenter and Ford Funeral Home, 209 Merchant Street, Fairmont, on Friday August 3rd, from 3p.m. to 5 p.m., with services being held on Saturday, August 4th at 11:00 a.m, with Father Joseph Konikattil officiating. Interment will follow at Grandview Memorial Gardens, with Full Military Honors conducted by the Marion County Veterans Council Honor Guard and the United States Army Reserves at Camp Dawson.

The family of Henry "Harpo" Krushansky created this Life Tributes page to make it easy to share your memories.