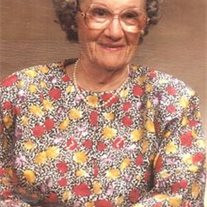 Hattie Boyce Hattie S. (Woods) Boyce, 103, of Pleasant Valley, passed away on Sunday, March 14, 2010 at the John Manchin, Sr. Health Care. She was born in Braxton County on February 17, 1907 the oldest of nine children born to the late Joseph W. Woods and Lula Jane (Dickey) Woods. Hattie was a devoted wife, wonderful mother and grandmother, not only to her children but other members of the family. In addition, she assisted her late husband in his business, Boyce Trucking, as the bookkeeper for more than 50 years. They were members of the Hillview Baptist Church. Hattie had an exceptional talent for crafts. She was also an excellent seamstress. She made several quilts, holiday decorations, ornaments, clothes for the family along with doll clothes. She and her husband enjoyed square dancing and she enjoyed getting away to go fishing whenever possible. She is survived by three children, her sons and daughters-in-law, Cecil and Laura Boyce of Morgantown, Charles and Janet Boyce of Irving Texas; her daughter and son-in-law, Shirley and David Doll of Boothsville; five grandchildren and their spouses, Mark Doll of Boothsville, Kimberly Boyce of Texas, Tammy and Melo Maiolie of Idaho, Jill and Bob Frichionne of Massachusetts and Gregg and Chris Boyce of Pittsburgh; six great grandchildren; her sister, Ruth Robinson of Illinois and several nieces and nephews. In addition to her parents, Hattie was preceded in death by her husband, Arthur A. Boyce in 1998; a granddaughter, Tracy Lynn Doll; a daughter-in-law, Nancy Boyce; three sisters, Stella P. Coen, Jaunita Eddy, Audella M. Woods; four brothers, Albert F. Woods, Lawrence T. Woods, Glendon Woods and Cecil Woods. The Boyce Family would like to thank the staff of the John Manchin, Sr. Health Care for providing such a lovely home and excellent care for Hattie during the past ten years. Family and friends may call at the Carpenter & Ford Funeral Home, 209 Merchant Street, Fairmont on Tuesday from 1pm to 9pm and Wednesday from 10am to 11am. The Funeral service will be held at 11am on Wednesday, March 17, 2010 at the funeral home with Pastor Darren Alkire officiating. Interment will follow at Mt. Zion Cemetery. In lieu of flowers Mrs. Boyce’s Family request that memorial contributions be made to John Manchin, Sr. Health Care, Activities Fund, 401 Guffey Street Fairmont, WV 26554 or a charity of choice. Condolences may be left for the family at www.carpenterandford.com

Hattie Boyce Hattie S. (Woods) Boyce, 103, of Pleasant Valley, passed away on Sunday, March 14, 2010 at the John Manchin, Sr. Health Care. She was born in Braxton County on February 17, 1907 the oldest of nine children born to the late Joseph... View Obituary & Service Information

The family of Hattie S Boyce created this Life Tributes page to make it easy to share your memories.