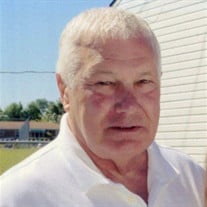 Harry David Shaw, 78, of Fairmont, passed away on Wednesday, March 6, 2019, at Fairmont Health & Rehabilitation Center, surrounded by his family. He was born on June 8, 1940, in Fairmont, West Virginia, the son of the late Harry Luther Shaw and Nina Frances (Hawkins) Shaw. David retired from Philips Lighting Company after 40 years of service. He was a member of the Fraternal Order of Eagles in Fairmont and attended Rose of Sharon Church. In his younger years, David enjoyed fast pitch softball. He was an avid Pittsburgh Steelers fan, a West Virginia University Football and Basketball fan. David loved spending time with his family and friends. He enjoyed the outdoors and especially trout fishing. David is survived by his son, Michael David Shaw and his wife, Tami, of Fairview; his daughter, Shelly Corwin, of Fairmont; five grandchildren, Brandon Michael Shaw and his wife, Frannie, Jacob Ryan Shaw, Mackenzie Nekol Shaw, Seth Douglas Corwin and Kelsey Elaine Corwin and her fiancée, Jonathon Halpenny; five great grandchildren; a brother, Lloyd Eddie Shaw, of Fairmont; two sisters, Janet Clelland and her husband, Mike, of Fairmont and Nieta Stewart, of Fairmont; several nieces and nephews. In addition to his parents, David was preceded in death by his wife of 33 years, Elaine (Byard) Shaw, who passed away December 11, 1993; and a brother-in-law, James Stewart. Family and Friends will be received at the Carpenter & Ford Funeral Home, 209 Merchant Street, Fairmont on Thursday from 5:00 – 8:00 pm, and on Friday from 1:00 – 8:00 pm, and on Saturday from 10:00 -11:00 am. Funeral service will be held at the funeral home on Saturday, March 9, 2019 at 11:00 am with Pastor Rex Musgrove, officiating. Interment will follow at Mt. Zion Cemetery.

Harry David Shaw, 78, of Fairmont, passed away on Wednesday, March 6, 2019, at Fairmont Health & Rehabilitation Center, surrounded by his family. He was born on June 8, 1940, in Fairmont, West Virginia, the son of the late Harry Luther Shaw... View Obituary & Service Information

The family of Harry David Shaw created this Life Tributes page to make it easy to share your memories.

Harry David Shaw, 78, of Fairmont, passed away on Wednesday,...