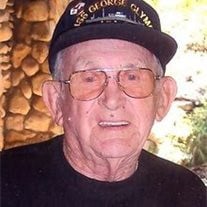 Godfrey Provance Godfrey Elisha Provance, 95, of Fairmont passed away on Tuesday March 15, 2011 at Fairmont General Hospital. He was born in Tappan in Taylor County on June 17, 1915 a son of the late Howard and Rosa Provance He was preceded in death by his loving wife of 55 years, Phyllis (Fletcher) Provance on April 28, 2006. Godfrey proudly served his country with the United States Navy as a Navy Coxswain in World War II on the USS George Clymer and he also served in several campaigns in the Pacific Theater. He was retired from FMC Corporation with 16 years of service in 1984 working in the mining equipment assembly department and was also formerly employed by Wilson Ford in Fairmont for 16 years as a mechanic. He was a 40 year member of Baptist Temple and he enjoyed gardening and being a regular lunch customer at Hardees in Fairmont for many years. He loved his family and friends, was an avid New York Yankees fan and took great pride in being a Navy veteran. He is survived by one daughter, Debra Provance of Welch, and three grandchildren, Michael John Plutro and his wife Beth of Carson, VA, Robbie Plutro and his wife Kelly of Charleston, WV and Cindy Plutro of Mt. Pleasant, SC. Also surviving is a special niece, Sherry Kutella and her husband Mike who lived with and cared for Godfrey, his neighbors of 46 years, Robert and Susan Plutro, and close friends, Robert and Joyce Morris of Fairmont. In addition to his parents and wife, Godfrey was preceded in death by a son, Blaine “Scotty” Provance, and five sisters, Mary Provance, Leota Fancher, Amalene Tucker, Levatta Shaffer, and Avonell Provance. Family and friends may call at the Carpenter and Ford Funeral Home, 209 Merchant Street, Fairmont on Thursday from 4-9 pm and on Friday from 10-11 am. The funeral service will be held at the funeral home on Friday March 18, 2011 at 11:00 am with Rev. Holley Faulkner officiating. Interment will follow at Maple Grove Cemetery where full military honors will be conducted by the Marion County Veterans Council Honor Guard. Serving as pallbearers will be Michael John Plutro, Robbie Plutro, Gary Ketterman, Roger Glasspell, Christopher Myhalsky, and Dominic Myhalsky. Online condolences and memories may be left at www.carpenterandford.com

Godfrey Provance Godfrey Elisha Provance, 95, of Fairmont passed away on Tuesday March 15, 2011 at Fairmont General Hospital. He was born in Tappan in Taylor County on June 17, 1915 a son of the late Howard and Rosa Provance He was preceded... View Obituary & Service Information

The family of Godfrey Provance created this Life Tributes page to make it easy to share your memories.