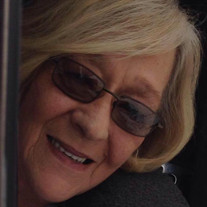 Geraldine “Jerri” Cecila Cook, 68, of Fairmont, passed away on Monday, May 13, 2019, at J.W. Ruby Memorial Hospital in Morgantown. She was born in Fairmont on September 13, 1950, a daughter of the late Gerald William Barker and Norma Jean (White) Barker. Jerri had worked in the Title Business and Bail Bonds services. She is survived by her children, a son Richard Cook II and his fiancé, Tammy Shipley, of Monongah; four daughters: Diana Cook, of Fairmont, Stephanie Hatcher, of Beckley, Janet Rhinehart, of Ohio, and Pam Caughey and her husband, Brad, also of Ohio; and five grandchildren: Hunter Goddard and Camryn Lane, of Monongah, Alexia Cook, of Beckley, Destiny Cook, of Monongah, Adam Blanchard, of Tennessee, and Zachary Brown, of Kentucky; and one great grandson, Jason Ryder Goddard. Also surviving are her brother, William H. “Buck” Barker and his wife Linda, of Fairmont, and her sister, Deloris J. “Peachie” Sickles, of Fairmont. In addition to her parents, Jerri was preceded in death by a sister, Bobbi Cowger. All services will be private.

The family of Geraldine "Jerri" Cecila Cook created this Life Tributes page to make it easy to share your memories.

Geraldine “Jerri” Cecila Cook, 68, of Fairmont, passed away on...