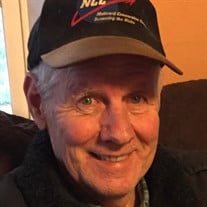 Gerald Lee Swiger, 77, of Fairmont, affectionately known by coworkers as “Lurch” at Westinghouse/North American Philips, died peacefully in his sleep on July 14, 2019 after a hard fought battle with Stage Four renal cancer, surrounded by his family. He was born on June 15, 1942, in Lumberport, a son of the late Gerald Sherley Swiger and Edith Louise (Drummond) Swiger. After graduating Lumberport High School in 1961, Gerald went on to proudly serve his country in the United States Army during Vietnam, and was deployed in the Bay of Pigs Invasion; he was honorably discharged from the Army in September 1963 as a Private E2, and then reenlisted with the Army Reserves and was honorably discharged as a Sergeant in November 1978. Gerald worked at Westinghouse/North American Philips, from 1966-1997, Southern Steel from 1964-1966, and Ravens Aluminum from 1963-1964. He was a certified Combination Welder and prided himself on being a lifelong learner; after being laid off from Westinghouse/North American Philips, he attended adult education classes, where he earned his certificate in Computer Integrated Manufacturing and a Journeyman License as an electrician. He was a member of the VFW Post 629, the American Legion in Clarksburg, and a lifetime member of the Simmental Association. He will be remembered for his love of farming, watching deer and wildlife, and discussing history, but most of all, for his love of family, friends, and neighbors. Gerald is survived by his loving and devoted wife of 40 years, Lou Ellen (Layman) Swiger. He is also survived by daughter, Millie Michael and husband Will, of Rivesville; son, Gerald Allen Swiger, of Fairmont; and granddaughters: Riley Madison Michael and Morgan Reese Michael, both of Rivesville. In addition to his parents, he was preceded in death by three brothers: Dennis L. Swiger, Charles Kirby Swiger, and David Mark Swiger, who died in infancy. The family would like to extend their gratitude to WV Caring Hospice and the Louis A. Johnson VA Medical Center for their excellent care of Gerald. Family and friends are welcome to call at Carpenter and Ford Funeral Home, 209 Merchant St., Fairmont, on Tuesday from 1 p.m. – 8 p.m., and on Wednesday from 10 a.m. – 11 a.m., with services taking place at 11:00 a.m. on Wednesday July 17, 2019, at the funeral home, with Pastor Cam Pyle officiating. Interment will follow at WV National Cemetery with Full Military Honors provided by the Harrison County Veteran’s Council Honor Guard and the United States Army Reserves at Camp Dawson.

The family of Gerald Lee Swiger created this Life Tributes page to make it easy to share your memories.