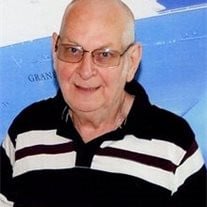 Jerry Cox Local businessman, owner of Holiday Florist, Gerald “Jerry” Leroy Cox 72, of Fairmont, passed away on Wednesday, March 31, 2010 following a 30 year battle with heart disease. He was born in Fairmont on January 21, 1938 the last surviving child of the late Lester Cox and Anna Smallwood Cox. Mr. Cox graduated from Fairmont Senior High School and attended West Virginia Business College. He worked in the floral business for 52 years. After working for several flower shops in Fairmont, he opened his own business, Holiday Florist in 1978, which he proudly operated until early 2010. Jerry had a deep faith and an extremely generous spirit. He loved working with flowers and he loved being with people. He was a strong supporter of the Sharing and Caring Cancer Support group. He was also a collector. He enjoyed collecting model trains, lighted houses and state quarters. He is survived by his loving wife and business partner, Delores V. Vandergrift Cox; two daughters, Karla Cox of Fairmont and Cheryl Summers and her husband Robert of Stephen City, Virginia; his granddaughter, Marissa Cox; his grandson, Andrew Summers; as well as several nieces and nephews and his beloved pets. In addition to his parents, Jerry was preceded in death by his daughter, Alice Ann Cox in July of 2009; three brothers, Dale Cox, Robert Cox and Gene Cox and three sisters, Evelyn Bartholow, Doris Wiles and Norma Summers. Friends and family may call at the Carpenter & Ford Funeral Home, 209 Merchant Street, Fairmont on Saturday from 6pm to 8pm, Sunday 2pm to 8pm and Monday 10am to 11am. The funeral service will be at 11am on Monday, April 5, 2010 at the funeral home with Rev. Karen Brown officiating. Interment will follow at the Smallwood Family Cemetery. Jerry’s family would like to extend a special thank you to the great people at Hospice Care for their wonderful care and support during his illness. Online condolences may be sent to the Cox Family at www.carpenterandford.com.

The family of Gerald L Cox created this Life Tributes page to make it easy to share your memories.