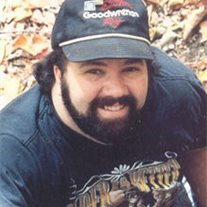 George G. Green II, 48, of Williams Crossroad Community in Fairmont died on Tuesday, June 30, 2009 as the result of a work related accident. He was born on May 19, 1961 in Fairmont a son of the late George G. Green and Moran Latour Green of Fairmont. George was a technician and was last employed with United Rental. Prior to that he had been employed with Urse Dodge for 14 years, Melvin’s Transmission and Nick’s Exxon. George loved to cook for his friends and family. He was a member of the Walnut Grove United Methodist Church. George enjoyed stock car racing and raced in his younger years. He loved riding his Harley Davidson motorcycle and participating in Poker Runs. George was a member of the West Virginia Road Hawgs. He liked working on and restoring his antique muscle cars. George enjoyed spending time camping and loved his family and his pets. In addition to his mother, he is survived by his loving wife of 25 years Lori Goodnight Green; his step father Bill Hanning of Fairmont; his step mother Pat Richards of Fairmont; his daughters Kristina Green and Leanne Green both of Fairmont; his brothers Walter Green and his wife Donna of Fairmont and Michael Green and his wife Stacy of Fairmont; his mother-in-law Joy Goodnight of Fairmont; his brother-in-law Jeff Goodnight and his wife Annie of Fairmont; several nieces and nephews from upstate New York and locally Drew Green, Mollie Green, Madison Green, Kennedy Green and Olivia Goodnight; his special friends Robert and Bub Yow and their family and friends; and the Dresser Club. Friends and family may call at Carpenter and Ford Funeral Home, 209 Merchant Street, Fairmont on Friday from Noon to 6:00pm. Services will be held at the funeral home on Friday, July 3, 2009 at 6:00pm with Pastor Jim Zinn officiating. In keeping with the wishes of the deceased, his body will be cremated after the service. In lieu of flowers, donations to the family will be accepted and deeply appreciated. Online condolences may be sent to the Green Family at [email protected]

George G. Green II, 48, of Williams Crossroad Community in Fairmont died on Tuesday, June 30, 2009 as the result of a work related accident. He was born on May 19, 1961 in Fairmont a son of the late George G. Green and Moran Latour Green of... View Obituary & Service Information

The family of George G. Green II created this Life Tributes page to make it easy to share your memories.