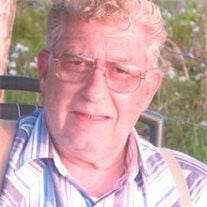 George W. “Bill” Janes, 71, of Piney Run in Fairmont, died on Thursday, June 25, 2009 at his home. He was born on July 2, 1937 in Grafton a son of the late Dallas and Helen Blake Janes. Bill was married to the late Dorothy Lillian Grubb Janes who passed away in July of 2008. He proudly served his country in the United States Navy. Bill graduated from the Huntington Barber College and owned and operated Janes Barber Shop for many years at various locations. He was a talented musician and loved to play country music on his guitar, mandolin and the fiddle. Bill also enjoyed fishing and hunting. Bill is survived by his children Thomas Allen Janes of Piney Run, David W. Janes and his wife Cindy of Bunner Ridge, John W. Janes of Piney Run, Samuel Janes of Piney Run, Lois Ann Renaldo of Morgans Ridge and Paula Jean Towns and her husband Kevin of Jordan; his brother Beryl Thomas Janes of Ashtabula, Ohio, his sisters Georgie Tharp and her husband Howard of Viola Road and Ruth Ann Doby and her husband Bill of Barackville; his step-brother Richard Heck of Ohio; his brother-in-law Odward Baker of Kingmont; his grandchildren Sarah Renaldo, Katie Renaldo, Amanda Quinn and her husband Philip, Amy Towns, Emma Janes, Leah Janes, Phoebe Janes, Elijah Janes, Isaiah Janes and Ivy Janes and his great granddaughter Shyera Peyton Quinn. In addition to his parents and his wife, Bill was preceded in death by a son Ronald Guy Janes who died in infancy; his sisters Martha Baker and Maxine Janes and his step mother Stella Janes. In keeping with the wishes of the deceased, his body will be cremated and there are no planned services. Carpenter and Ford Funeral Home, 209 Merchant Street, Fairmont has been entrusted with the arrangements. Online condolences may be sent to the Janes family at [email protected]

The family of George W. "Bill" Janes created this Life Tributes page to make it easy to share your memories.